The students fighting back against military oppression in Myanmar 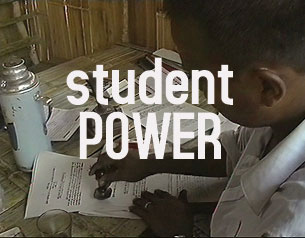 Archive report which looks at the role played by monks and students in the underground resistance in Myanmar in the mid-1990s, at the height of the country's military regime.

We reveal how the students organise themselves through secret meetings, despite SLORC's fierce security clampdown. We also uncover the involvement of Buddhist monks in the student underground. A former student prisoner speaks candidly of torture he endured. Ang San Suu Kyi discusses her renewed virtual house arrest, the attack on her life and the heavy price being paid for democracy in Burma. We profile two 'wanted' students fleeing the Rangoon clampdown for the Thai/ Burma border. From a jungle hideout the commander of the armed students' wing, the ABSDF, vows the students will fight for their survival using guerrilla-style tactics. It's clear their border campaign is faltering. Few camps survive inside Burma and there's little food at the ones which remain. Soldiers prepare for battle with mud-encrusted weapons dug up from Thai soil. Increasingly hounded by the notorious Military Intelligence, the students are driven into hiding and to Thailand: a reluctant safe-haven.
FULL SYNOPSIS
TRANSCRIPT