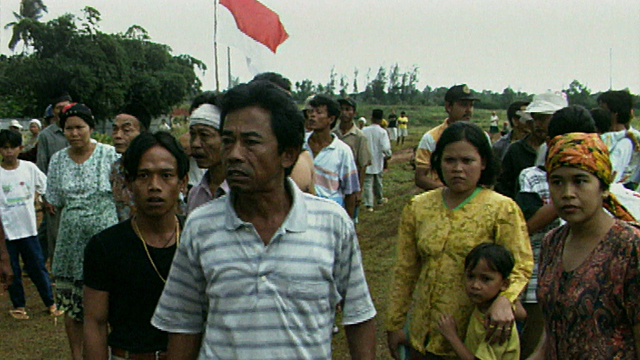 We examine the rising tensions in Indonesia. A Buddhist temple is engulfed in flames as a frenzied mob yells abuse. They have found a target for their anger: the 3% Chinese population which controls 70% of private wealth.

Saturday night in Jakarta: the rich attend the opening of Fashion Cafe. Chinese attendees rub shoulders with Claudia Schiffer and Naomi Campbell. Miles away in a rural kampong, a young Indonesian tells bitterly of how her parents' home was bulldozed to make way for development. Muslim and impoverished, she blames the Chinese for her problems. Chipping away at his handicap on manicured golf course, Chinese billionaire, Bob Hasan, denounces the rioting as 'communist motivated'; and 'small, small'. But Brabit Medatema shows us the charred and blackened interior of the Buddhist temple he helped to build. When his home was attacked by the mob all he could do was escape with his family. Huddling in church, Chinese Christians fared no better. In an attempt to quell increasing resentment, many Chinese are converting to Islam. Without bodyguards and high walls, the ordinary Chinese pay the price for the success of their wealthier compatriots.
FULL SYNOPSIS
TRANSCRIPT