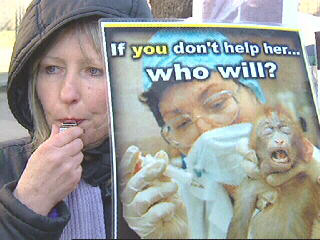 Militant animal rights activists in England are willing to do anything to stop new labs being built. Police claim they've evolved into extremists cells and are preparing to bomb scientists into submission.

"If we need to, we can tear that place down with our bare hands!" vows activist Mel Broughton. He's leading the protest against a new laboratory being built by Oxford University. But scientists like Dr Colin Blakemore argue that activists are preventing research into life threatening diseases. "It's difficult to think of a treatment developed in the past which hasn't involved animal testing." He's paid a high price for his public stance. "Two letter bombs were sent to my home. One of them was packed with needles with HIV infected blood." According to Superintendent Steve Pearl, a core of activists are "set-up in quasi-terrorist, cell like structures." As well as targeting scientists, they bombard businesses and individuals that often only have remote links to labs. "We even target travel agents because they send people to Mauritius where they breed the monkeys that are sent to the labs", boasts one protestor. But activists face a growing public backlash. For the first time, demonstrations are being held in favour of animal testing. As one protestor argues: "Humans come first."
FULL SYNOPSIS
TRANSCRIPT