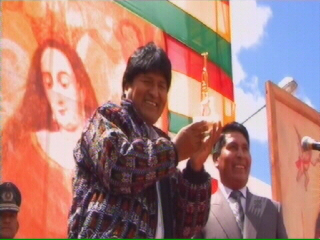 He jokes that he's America's worst nightmare and plans to nationalise Bolivia's oil industry and overturn the old social order. As yet another South American country 'goes left', we profile Bolivia's new President.

As a former union leader, Evo Morales is more accustomed to attacking governments than leading them. But Bolivia's first ever indigenous President has ambitious plans for his country. "Sooner or later there must be a profound transformation", he vows. "I want a new economic model." Morales' first objective is to seize back control of the country's national assets, including its enormous natural gas reserves. "Oligarchies won't just give up. They want to continue sucking the Bolivian people's blood." A series of forced privatisations imposed by the World Bank and IMF left Bolivia the poorest country in Latin America. Now, Morales has pledged to renegotiate existing oil contracts. Actions like this - and his close friendship with Hugo Chavez and Fidel Castro - have sent shivers down Washington's spine. But any heavy-handed action from the White House could backfire. As analyst Jim Shultz explains: "America's fear is that it will push Bolivia into the arms of Hugo Chavez."
FULL SYNOPSIS
TRANSCRIPT