Rape For Who I Am 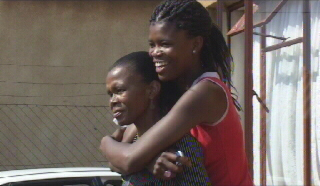 As well as facing institutional discrimination, lesbians in South Africa run the risk of being raped because of their sexuality. The authorities seem reluctant to tackle the growing problem.

"He told me he was going to teach me a lesson and show me that I'm a girl", states Bathini. Like many victims, she was too scared to go to the police after being gang raped. But Mary refused to suffer in silence. Through sheer determination, she tracked down her rapist and passed on his details to the police. When they still hadn't arrested days later, she threatened to go to the press. Other victims have been unable to press charges because doctors wouldn't corroborate their stories. "The doctor's report basically said I just had sex with this man - that I wasn't raped", states Keba. Activists are now pressing for new legislation to protect all women. Not available to North America
FULL SYNOPSIS
TRANSCRIPT