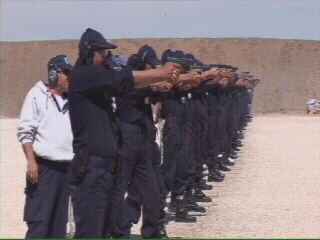 Every six months, an entire class of 1,500 Iraqi policemen is wiped out. But that isn't stopping the flow of desperate recruits. We follow one class through their training.

It's one of the most dangerous jobs in the world. Even at the police training camp in Jordan, recruits are targets for insurgents. "I can't think of many police who have to face RPGs and mortar rounds on a daily basis", states Gary Bullard, director of police training. "These are the poor who are so desperate for work, they're willing to stand in long recruitment lines at the threat of being bombed." In recent months, the training programme has been restructured to focus on simply keeping graduates alive. "We realised if we could teach them enough survival techniques for the first 90 days, they would get over the learning curve," explains instructor Jim Hammond. But even before these changes were made, a US inquiry criticised the training programme for being "insufficient to produce capable policemen." Too many recruits are illiterate and there are concerns insurgents are infiltrating the police. However, the majority of recruits here want simply to do their bit to rebuild Iraq. As one explains: "We enlisted knowing we might be killed so that our children can have a better life."
FULL SYNOPSIS
TRANSCRIPT