She's one of the most photographed women in the world. The glamorous Wonderbra girl with the famous husband and enviable lifestyle. But strip away the glitz and the real story of Slovakian supermodel Adriana Sklenarikova emerges. 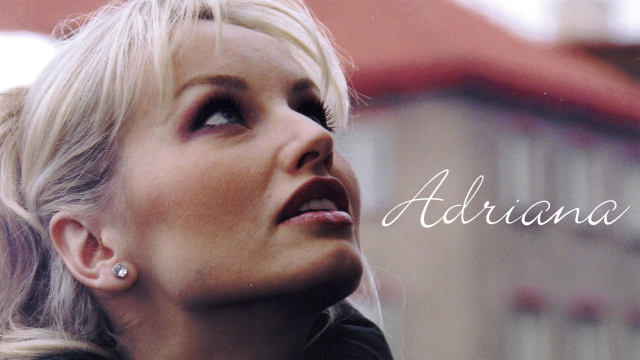 She's one of the most photographed women in the world. The glamorous Wonderbra girl with the famous husband and enviable lifestyle. But strip away the glitz and the real story of Slovakian supermodel Adriana Sklenarikova emerges. In this intimate documentary, she speaks eloquently about her childhood under Soviet rule, participation in the Velvet Revolution and the pressures of life as a model. This beautiful and polished production provides a revealing insight into celebrity life in the new Eastern Europe.

A young woman chews her lip nervously. As the hairdresser applies the final touches to her elaborate hairstyle, she knows the moment she has dreaded has nearly arrived. "I'm out of practice and nervous. I don't know how I'll walk in these shoes and am afraid I'll trip." A few meters away, a horde of photographers await her long expected return to the catwalk. But it's also the first time Adriana's husband, champion footballer Christian Karembeu, has seen her work and she doesn't want to disappoint him. Born three years after the Soviet occupation of Czechoslavakia, Adriana Sklenarikova grew up in a small Slovak village. Until she was 20, she was no different from her peers. She juggled schoolwork with gymnastics and socialising; had no concept of life outside the Soviet Union and dreamed of studying medicine at Prague. Then perestroika occurred. "We hoped Perestroika would mean that maybe banned films would be shown or that jeans could be bought in any store. But to go to Paris for a weekend? That was unimaginable", Adriana recalls. Within months of starting university, she found herself caught up in the Velvet Revolution. "I was at home in Banska Bystrice. When I came back to university it was closed and they said it probably wouldn't open." Medical students like Adriana walked around the demonstrations with red crosses on their sleeves, ready to help. "I'm happy I was here. For our parents, 1968 didn't work but I'm glad it worked this time." But initially, life after the fall of Communism seemed the same for Adriana. "Exams, books, libraries - the grey Prague." Then, one day a scout invited her to come to a model casting nearby. "That was the beginning of everything." The agent wanted her to move to Paris immediately but Adriana wanted to finish her studies and stay with her boyfriend. "It was horrible. I couldn't decided and thought I wouldn't go." Her parents eventually persuaded her to give it a go but nothing could have prepared her for life in Paris. "I spoke no English or French. Even the subway was terrifying for me." Her agency put her on an immediate diet. "They told me not to eat bread, not to eat sweets, almost anything. I thought it was a joke." But after years of hard work attending daily castings, she began to get noticed. "When I was offered the ad for Perroni, me agent told me it would change my life." It did. The wonderbra contract soon followed and she became one of the highest profile models in Europe. But despite her fame, champion footballer Christian Karembeu had no idea who she was when they first meet. "I didn't know who she was and she didn't know who I am. We meet like two normal people." As a mixed race couple, Adriana and Chris attracted lots of comments but that never bothered Adriana. "I always say I don't really see my husband's skin colour." Instead, she had more pressing concerns. "I found watching football horrible. I thought I'd fall asleep and wanted to take a book with me." Adriana's interest in helping others and knowledge of current affairs led to her being invited to act as an ambassador for the Red Cross. She's been highly commended for her work campaigning against landmines but for millions of people, she remains primarily a fashion icon.
FULL SYNOPSIS
TRANSCRIPT