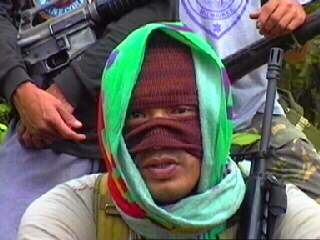 It's the heartland of terrorism in South East Asia. A sanctuary for groups like Jamaah Islamiah and Al Qaeda. We follow the police battling to shut down the Jihadist networks in Southern Philippines.

"I am in the crosshair of terrorism here", proclaims police chief, Lito. For the past 18 years, he's led the police unit tasked with hunting down extremists. Tonight, he's received a tip-off about a suspected JI member. But as police approach their target, the operation unravels. "Someone's been shot!" states a man in the crowd. It's Lito's informer. The night's operation is cancelled. Next day, Lito travels to Sulu, where Abu Sayyaf and Jemaah Islamiyah are known to be regrouping. Despite the presence of 2,000 troops here, success against the extremists is far from assured. Within hours of arriving, one of Lito's colleagues is gunned down.
FULL SYNOPSIS
TRANSCRIPT