A personal and revelatory film following a young Serbian family as they are buffeted by global terrorism. 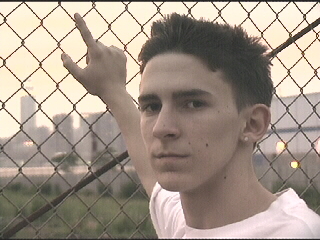 During the US led bombing of Serbia, Ljilja and her two young sons fled Belgrade to seek sanctuary in America. Over the next few years, they navigate the complicated waters of 'becoming American' whilst wrestling complex issues of personal and national identity. Then, in a bizarre twist of fate, Ljilja found herself working on the 80th floor of the Twin Towers on September 11, 2001. A personal and revelatory film following the young family as they try and make sense of the world around them.

As the school play comes to an end, parents look on proudly at their young children singing the American anthem. But one mother isn't smiling. "I have very negative feelings when I see my kids singing the American anthem", confides Ljilja. "My own patriotic feelings are awakened and I remember everything we survived. I feel like a traitor." March 24th, 1999. The bombing of Belgrade began. "It was horrible", recalls Ljilja's eight-year-old son, Dusan. "I wanted to be in a shelter all the time because I was scared." Days later, Ljilja and her sons, Dusan and Vlada, fled to America. "All I cared about was escaping and our only option was to come to America", Ljilja explains. "I never thought about the fact that America bombed us." Initially, they only planned to remain in America until the bombing ended. The boys didn't speak any English and were traumatised. "When we first got here, we were scared of airplanes," admits eleven year old Vlada. "When Dusan heard them, he would run into the house shaking." But the boys readily adapt to American culture. Quickly developing strong American accents, they make new friends and learn to skateboard. Ljilja's palpable bitterness at US foreign policy and sense of nationalism make it harder for her to fit in. But even she couldn't deny the advantages of remaining in America. "Life is a lot better here." A few years on, she has good job in the World Trade Centre; Vlada graduates top of his year and they seem just like any other family. Then disaster strikes. "That day was just like any other day. Then I heard an explosion", Ljilja confides. "I grabbed my purse and started to run." When she was half way down the building, the second plane hit her tower. "We felt an explosion in our building and all hell broke lose. People started falling all over each other." Although she survived 9/11, the attack reopens old wounds for Ljilja. "During the attack, all I could think about was the bombing of Belgrade. The two seemed similar", she confides. When American troops invade Iraq, her sense of pain is made more acute. Even her sons struggle to comprehend the actions of their adopted homeland. "I get really upset when I see the bombings on TV", states Vlada. "I remember everything that happened in Belgrade and how bad it was." Despite these feelings, both boys are now too American to contemplate returning. "For the first time, I'm not really looking forward to spending summer in Serbia", confides Vlada. "I've totally got used to the way we live here."
FULL SYNOPSIS
TRANSCRIPT