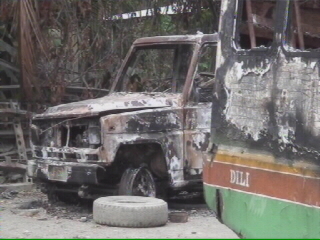 "Watch out for grenades. They're using the grenade launcher!", warns rebel leader and former police chief Alfredo Reinaldo, as government forces opened fire on them. First the army splintered after Prime Minister Mari Alkatiri sacked a third of the force for complaining about discrimination. Then Reinaldo's defection led to the police fracturing. The hope is that foreign peacekeepers will restore order but reuniting the country behind the government may prove much harder. As one woman states: "we need good leaders to govern this country otherwise these things will continue."
FULL SYNOPSIS
TRANSCRIPT