Return to the Falklands 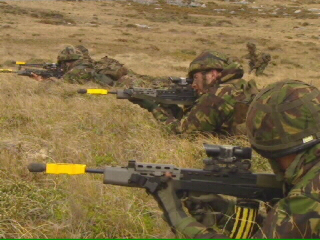 "Argentineans have a deep obsession with the Falklands Islands. It's like the Jews with Jerusalem", explains Esteban Hubner. He's visiting the islands for the first time with Falklands veteran Sergio Delgado. But Islanders are still bitter about the invasion. "I was furious. How dare they come and invade us!" states Trudi McPhee. Previously, Argentina offered the Islanders financial incentives to recognise its sovereignty. Now it's taking a much harder line. "They're putting pressure on us in every possible way, interfering with the fisheries and flights", complains McPhee. Fortunately for her, Britain has no plans to withdraw.
FULL SYNOPSIS
TRANSCRIPT