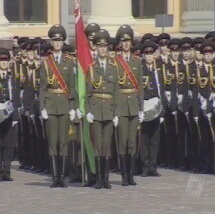 Is Russia using Belarus as a proxy agent to sell weapons to regimes like Iran or North Korea? Reports are emerging which paint a disturbing picture.

For more than a decade, President Lukashenko has maintained his grip on power using proceeds from the global arms trade. Victor Bout, one of the world's most notorious arms dealers, is believed to be behind Belarus' highest profile arms company, Beltechexport. "He's the man who helped Beltechexport become a major player in the arms market," states journalist Svetlana Klink. But as former KGB agent Sergio Anisko points out: "Bout has deep connections with the Russian military." Anisko claims Lukashenko is little more that the Krelim's puppet. "The FSB doesn't just have complete control of the Belarusian military, it dictates Belarusian policy." He also believes the most controversial arms sales are made on behalf of Moscow. But since Russia manufactured the only anti-aircraft missile capable of fending off an American attack, Washington is paying close attention to Belarus. It fears this weapon could end up in the hands of countries like Iran. As David Kramer, Deputy Assistant Secretary of State declares: "The US is not going to sit ideally by while Lukashenko engages in reckless and dangerous arms sales."
FULL SYNOPSIS
TRANSCRIPT