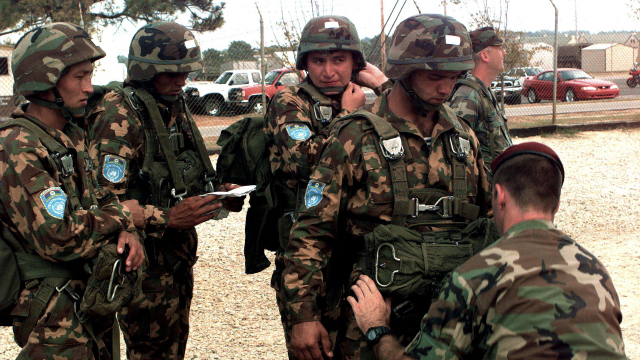 One year on and there is still no justice for those killed in the massacre in Andijan, Uzbekistan on 13 May 2005. After an attempt by gunmen to release religious extremists in the jails, the whole town was moved to protest not simply over the men in prison but poverty and a repressive government regime. Hundreds of unarmed people were killed and injured. This film was made by the first camera crew to make it to Andijan. Having secretly entered the town via Kurdistan they interview those involved both in Andijan itself, and in the refugee camps that the tragedy created. Rushes are available upon request

May 12th 2005 Men accussed of terrorist activites. Court interior footage. May 13th In protest a building was taken over by locals in protest. Stills of confrontation. Audio of Sharif Shakira (died later that day) talking to the Usbek BBC as he walked out of the occupied building to the main square on May 13th ' They've killed peacesfull demonstrators, there are bodies all over the place. They've brought armed vehicles, they're killing people. I can see 3 or 4 bodies, many are wounded. Interior shots of building that had been taken over. Furniture smashed, pictures on the floor etc. On the road in Kurdistan trying to get into Uzbekistan Andijan. Shots of the city taken from inside a car. Najubg a secret canera On the main square. Destroyed cinema (where a massacre took place) Street where people had attempted to find a way out. Gun shots all over walls. Interview with family who lost their son in the massacre Outside the prison - loved ones trying to discover if their loved ones are inside. Father 'There's nowhere we havn't searched, we havn't found him. But people say he is alive, we live with this hope.' Mass grave in countryside outside Andijan. Tombstones only with numbers, no names. First time they were filmed. Grandparents left to look after 13 grandchildren 'We buried our son on Wednesday. That night the military came to our home wearing masks, they were pointing guns at the children' Fatima (grandmother) ' They shouldn't come back from Kyrgyzstan, they should come only when there's peace here. What would I do if the authorities kill them and their babies? Camps in the hills outside Andijan where 420 Uzbeks are. Uzbeks want them back the the Kyrgystan government refuse to do so. Inside the camp. With Fatima's two daughters in the camp playing video of her telling them not to come back. Their story 'The men took off their shirts, the women their scarves and waved them at the soldiers shouting "Don't shoot, don't shoot!" We showed them our empty hands, they just fired anyway. So many boys, so many men, so many people died.'
'And what about our brother? Did you see him?'
'He died, in hospital.' Talking to rebel leader in the south of Kyrgystan 'My demand is that independent investigators should come to Uzbekistan - nuetral people, not from the Uzbek government, or our side... and whoever is guilty should be punished.