They call Ciudad Juarez "the serial killers' playground". In the past decade, over 500 women have been murdered. There are claims the police are protecting their killers. A hard hitting investigation. 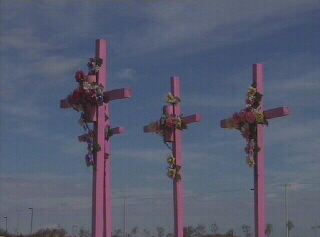 They call Ciudad Juarez "the serial killers' playground". In the past decade, over 500 women have been murdered. Most were abducted, raped and tortured before they were killed. So many women have died that a new word has been invented to describe what is happening here - 'femicidios', the murder of women. But despite the international outcry, the killings have continued. There are even claims the police are protecting the girls' murderers. What has made Ciudad Juarez so dangerous for women? This documentary investigates.

The city of Ciudad Juarez is littered with pink crosses. They come in all shapes and sizes, scrawled on walls and electricity pylons, in petrol stations and bus stops. Every so often, you come across a tatty 'Missing' poster, pleading for information about another vanished girl. But the residents pay them scant attention. After so many killings, they're immune to the sight. "She was 17 years old. She had all the hopes of youth. And someone came and cut her dreams short," laments Benita Morares, mourning her murdered daughter. Maria Sagrario was also 17 when she was raped and murdered. One of her breasts was cut off and her ovaries removed. "These people have no conscience. They are not human," states her mother. The authorities pinned the murders on two poor bus drivers, Victor Garcia Uribe and his friend, 'Seal'. But they have always maintained their innocence. From his prison cell in Juarez, Uribe describes what happened. Police dragged him from his car, threatened to kill his family and drove him to a private house, where he was tortured. "They told me to say I had killed the women. They started putting out cigarettes on my penis and giving me electric shocks." Then reports emerged that the police coroner, Castro Valles, resigned after being asked to plant fabricated evidence. "The order to fabricate evidence was delivered orally. That's why nothing can be proved", he states. The prison doctor confirmed both men had been severely tortured and reporters began looking for the house. They traced it to a property owned by the police commissioner. With pressure growing, the government sent two officials to Ciudad Juarez to examine the police investigation. "We found 81 infractions committed by state officials", recalls prosecutor Maria Lopez Urbina. "On one occasion, an employee lit a fire to warm himself using case files for tinder." So many mistakes have been made and so much evidence destroyed that people believe the police are protecting the real killers. "It's not that the police can't solve this problem. It's that they don't want to", claims one victim's mother. Ciudad Juarez is home to the world's second largest drugs cartel. "In this city, most respectable citizens with economic power are involved in the drugs trade", states Norma Andrade. Lawyer Dante Almaraz agrees. "The local government is up to the neck in commitments to the drug barons. And the federal government has agreed to give them a wide berth, even in these circumstances." The police of Juarez are known to have worked as hired killers for the cartels before. As the government's own investigator asked: "Can we really expect that these people will actually investigate the cases?"
FULL SYNOPSIS
TRANSCRIPT