Tale of an Occupied Town

The Vichy government and years of Nazi occupation are one of the most inglorious periods of French history. But what was life like for ordinary citizens during those years? 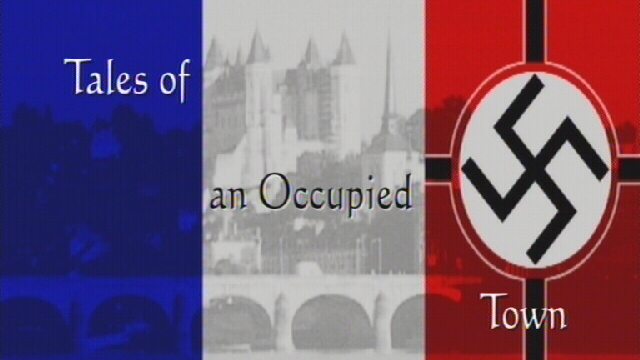 The Vichy government and years of Nazi occupation are one of the most inglorious periods of French history. But what was life like for ordinary citizens during those years? What tactics did they adopt to survive? This evocative documentary profiles the beautiful town of Saumur under occupation. It dispels the 'Good French/Bad French' notion, focusing instead on the experiences of normal citizens. Stories of resistance heroes and collaborators, opportunists and traitors are interspersed with stunning archive to tellingly evoke the times.

"Occupation is worse than anything", reflects resident Jeannine Bourdin. "It's not when most people die. But it's when things that aren't very pleasant come out into the open." When the Germans invaded Saumur in 1940, many feared a bloodbath. But the occupying force was instructed to treat locals well and life initially carried on as normal. "The French thought the most important thing was to survive", explains historian Robert Gildea. "The most dangerous thing was to get involved - whether in the resistance or as a collaborator." But this 'wait and see' policy did not mean residents were indifferent to the occupation. "They could not stand the Germans being there", states historian Alain Jacobson. Slowly, networks of resistance crystallised. Some residents refused to host billeted Nazis. Others helped imprisoned French soldiers escape. Michel Ancelin's father was a member of the French resistance. "One night, 40 prisoners escaped. My father was asked to hide them for a night or two."
But many others capitalised on the occupation to settle old scores. "Some of Saumur's cafe owners denounced the owners of the 'Budan' bar who had not put up a sign saying 'Jewish Business'", recalls Franck Marche. Residents like Jacques Vasseur joined the French Gestapo and local authorities collaborated with the Nazis to round up Jews. "The Prefet and his men applied all the laws of the Vichy government to the letter and sometimes went even further," complains Marche. His parents were among the Jews sent to Auschwitz. Then the Gestapo infiltrated the local resistance network and arrested their members. "My leader, Jean Renard was brought in to confront us", recalls Pierre Deschamps. "His vests and shorts were soaked with congealed blood." Michel Ancelin's father was beaten into a coma, then executed. When the Germans realised they were losing the war, they began massacring civilians. Raymonde Cochin was nine years old when her parents were murdered. "The women were killed with their eyes blindfolded and the men were tortured", she describes. Finally, in August 1944, the Nazis left. But the Nazi withdrawal heralded a wave of retaliation attacks. Women suspected of having affairs with Germans had their heads shaved. "It was as if women no longer belonged to themselves but to the nation. Their bodies were an extension of national territory," reflects Marc Bergère. French Gestapo member, Jacques Vasseur, was so afraid of being targeted, he hid in his mother's attic for 17 years. Four years later, the city of Saumur was awarded the Croix de Guerre for its patriotic resistance during the years of occupation.

We are aware that to tackle a subject of such importance and of high controversy in France even today, it is fundamental to hold a pure and untainted understanding of its history. We are confident that our extensive research, which includes analysis of this period with historians and experts, sheds light and help to keep to our historical objective. We were inspired to make this film when we finished Une Bataille pour Lhonneur, our previous documentary in the region. We realised that the history and personal recounts of our local witnesses were given a picture that was very much felt in the rest of France and indeed in other occupied countries in Europe at the time but that also still affect us all today. (Iraq is a good example) The occupation as a historical theme is a real challenge to embark upon. Our main intention is to show that in war, occupation can have deep lasting damage and trauma for all of those involved. In Tales of an occupied town we are intending to break out of the good French/ bad French version of events, to try and make sense of the diverse and contradictory experiences of ordinary people during the occupation and to concentrate on the strategies they adopted in order to survive those difficult years. This often involved to keeping ones options open, not committing oneself irretrievably either to Resistance or to collaboration but being ready to change direction as the occasion demanded. We do not ignore the serious ideological and political commitments that a lot of people had. Nor deny the brutality of the Occupation, which intensified as it dragged on and became particularly vicious in the last months as the Germans retreated. The French were often cold, hungry and fearful but they demonstrated great resourcefulness, imagination and willingness to compromise in order to live reasonable lives. Significantly we interviewed historians but rather than give an analysis of the period we concentrated on the small intimate daily details of peoples lives and the private memories that so tellingly evoke the times. Our story is largely based on interviews with witnesses to the events and their descendants but we mainly relay on accurate historical methodology. We combine footage of Saumur and the area as it is today with archive material, documents, letters and photographs. We use low-key reconstruction and inter-cut this into the main material using soft transitions, slow motion, wipes, dissolves, masking, computer generated imagery and special effects. There is a voice over narration and an original sound track.