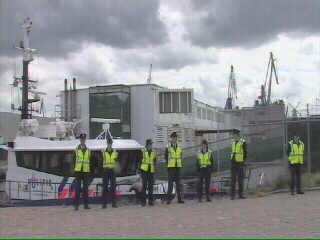 In recent years, Holland has embarked on a ruthless campaign to deter migrants. Policies like imprisoning asylum seekers in prison hulks or denying immigrants benefits have been introduced.

At a refugee facility in Amsterdam, a family with a young baby are waiting to be made homeless. They've lived here for five years but their application for asylum has just been rejected. "The rules are they must be evicted", states immigration spokesman Michael Slaager. But surprisingly, they're not being deported. Instead, they're cast out on the streets and left to fend for themselves. "Holland always had a big mouth about Human Rights. Now we're being condemned by Amnesty International", laments politician Jan de Wit. He claims the new laws, championed by Immigration Minister, Rita Verdonk, are inhumane and absurd. "You can't call this a good law if the result is that a third of the people don't officially exist but are here illegally." Other would-be immigrants are locked up on prison barges where conditions are atrocious. As undercover journalist Robert van de Griend, states: "People are treated like they are animals ... You could actually see them going mad."
FULL SYNOPSIS
TRANSCRIPT