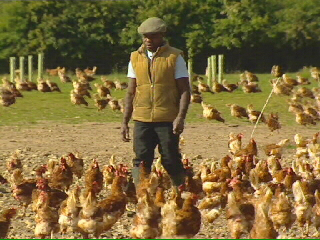 Wilfred Emmanuel-Jones claims to be Britain's only black farmer. Originally from Birmingham, he is causing a stir in its conservative countryside.

Growing up in a ghetto, "the expectation was you were going to end up in society's dustbin." As a child he took refuge in his parents allotment. Now with 14 hectares in Devon, he admits "you have to have a pioneering spirit" to survive. When Sonia Francis-Mills of the Devon Race Equality Council arrived "someone slapped me, and said we don't want you here." As Wilfred runs to be an MP and picks up prizes at the Devon Show, it seems attitudes could be changing.
FULL SYNOPSIS
TRANSCRIPT