From attacking scientists and destroying labs to desecrating graves and intimidating staff, militant animal rights activists are prepared to do anything to further their cause. How do they justify their actions? Are they freedom fighters or terrorists? 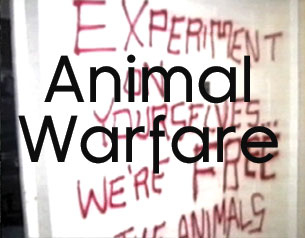 From attacking scientists and destroying labs to desecrating graves and intimidating staff, militant animal rights activists are prepared to do anything to further their cause. How do they justify their actions? Are they freedom fighters or terrorists? This slick investigation goes undercover with the ALF. We join them on raids to liberate animals and hear from the scientists they target. A probing report into extremist activism.

At a secret location in Gothenburg, a group of animal rights activists meet to plan their attack. They don masks and balaclavas, stealing number plates before setting off. "I'm putting socks over my shoes so that they don't get my prints", explains one. Most have done this before. Their target: a battery farm housing nearly 20,000 birds. It takes just 15 minutes for them to break into the building, rescue a few hens, and scrawl the group's infamous logo on the walls: ALF. Raids like this may seem almost humorous but the animal rights movement is no joke. In America, the ALF is officially considered the second most important terrorist threat after Al Qaeda. "They're set up in quasi terrorist, cell-like structures", explains Superintendent Steve Pearl. He estimates there is a hard core of about a hundred activists, prepared to do anything for their cause. But ALF members dispute they are doing anything wrong. "French resistance fighters are considered heroes for sabotaging and bringing down factories of occupying Germany", reasons Rodney Coronado, now facing 20 years in prison for showing students how to make bombs. Some even justify the murder of scientists who conduct experiments on animals. "Assassinating a vivisector would have a trickle down effect", states ALF spokesman Jerry Vlasak. "For five lives you can save a million, two million, ten million non-human lives". One of the ALF's highest profile targets is Oxford University. The university's proposal for a new science lab has the activists up in arms. "This is about anger, pure bloody fury, and Oxford University are going to feel it like never before", states ALF leader, Mel Broughton. Extremists have already burnt down a university boathouse, causing 800,000 worth of damage. Two years after work on the new lab began, the building remains a skeleton. Workers wear masks to hide their identity. The first contractor dropped the project after a series of attacks. The current developer insists on complete anonymity to safeguard their employees. Last February, angered by the extremists' tactics, hundreds of people took to the streets to voice their support for the project. They chanted; "No more rats, no more fear, animal testing is wanted here". In America too, a backlash is developing to the animal rights movement. Following intensive campaigns, the animal rights group, PETA, got fast food chains to improve their treatment of animals. Now PETA themselves are the target of similar lobbying. Adverts funded by the Centre for Consumer Freedom publicise PETA's donations to convicted extremists. Posters on the subway highlight the President of PETA's infamous comment; "Even if animal research led to a cure of AIDS, we'd be against it." As scientists repeatedly point out, most medical breakthroughs have involved animal testing. "If you're the mother of a whimpering baby, would you deny them life saving medicine because those drugs was tested on animals?"
FULL SYNOPSIS
TRANSCRIPT