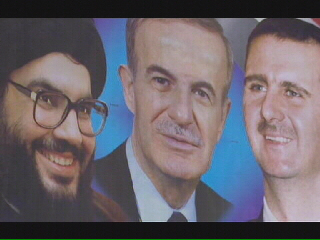 War in Lebanon has dramatically altered the political spectrum in Syria. Support for Hezbollah is strong, and many now call for the re-capture of the Golan Heights.

In a nationally televised address to the Syrian Journalist Union, President Bashar al Assad issued a stark warning to Israel; "Your weapons, warplanes, rockets and even your atomic bombs will not protect you". He is playing a dangerous game. Syria's secularism is under attack. Posters of Nasrallah are selling on the streets like hotcakes; "we keep running out of them". And 90% of women wear the veil. As economist Ayman Abdel Nour points out, "the biggest danger for Assad's regime is radical Islam", so why does he allow and encourage it now? Is Bashar Assad pursuing this policy to increase his political strength and refocus the nation back to; "our one cause - the Golan Heights"? Yet, as Nour admits; "Syria cannot open a direct war with Israel. We cannot win". Instead Assad hopes to force the US into talks, offering himself as the only moderate voice, whilst at the same time "supporting Hezbollah in Lebanon, Hamas, and jihad in Israel." If Assad plays his cards wrong, the worry is that sunni Sheik Mohammad Hasbah's prediction of "more violence and bloodshed in the Middle East" could come true.
FULL SYNOPSIS
TRANSCRIPT