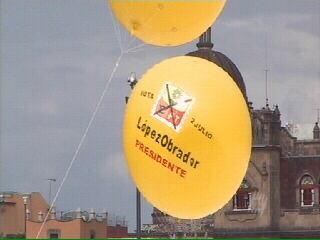 Mexico's election is still in dispute. With a parallel government voted in over the weekend, we witness the stand-off between Obrador and the PRI government.

Since July 2, two million people have squatted 12km of a major road in Mexico City to protest against the election result. "We will not be moved. No! No!" Convinced that he has been kept out of office because he wants to address "the needs of the humble people, the poor," Lopez Obrador demands a recount. Whilst the ruling party declares; "there is no evidence of fraud in one single poll". But, Dr Victor Romero points out the unusual trend that emerged; "Obrador was winning and suddenly at 70%, he started losing". Whether or not the poll was fraudulent, Mexico is now polarised. While the middle class worries about the economy, the poor are radicalised by Obrador's promises of re-distribution.
FULL SYNOPSIS
TRANSCRIPT