Is it possible to separate the real Idi Amin from the strange and bizarre stories that surround him? 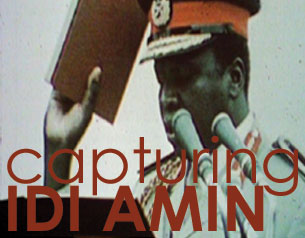 In 2005, Idi Amin returned to Uganda in the form of actor Forest Whitaker, who's starring in the movie 'The Last King of Scotland'. The film is a thriller set in Amin's Uganda and tells the story of a fictional Scottish doctor who becomes the dictator's closest advisor. But making a movie about such a controversial figure raises a number of questions. Is it possible to separate the real Idi Amin from the strange and bizarre stories that surround him? How will Ugandans react to this interpretation of their history and how does their view of Idi Amin differ from that of the West? This documentary follows the filmmakers on location in Uganda. But it is far more than just a traditional "making of" and uses the movie as a starting point to explore the bizarre world of Idi Amin.

"One of the things that occurred to me is that up until Nelson Mandela, Idi Amin was the most famous African in history", states director Kevin Macdonald. "All the stories about his cannibalism, witchcraft and multiple partners. He represents all that's worst and savage about the Dark Continent." Few facts are known about Amin's early life. What is known is that he joined the British Army in 1946 and was Uganda's heavyweight boxing champion for nine years. "He was a born leader and a very successful soldier", recalls Amin's former colleague, Major Iain Grahame. "When he was in the British Army, he was a kind of licensed killer", claims director Kevin MacDonald. "There are all sorts of stories of the kind of things he did." By the time Uganda achieved independence in 1961, the British had promoted Amin to the rank of Effendi, thereby ensuring that he was one of the most powerful men in Uganda. This gave him the opportunity to seize power from President Milton Obote in a military coup in 1971. "He was the first president who came to the people, the first president who seemed to care", states youth co-ordinator Chris Rugana. The press lapped up stories about the wild excesses of his presidency. "He appealed to a racist stereotype of Africa - this classic basket case African dictator", states journalist Jon Snow. He invited himself on a State Visit to England and told the Queen he wanted to; "meet the leaders of British liberation movements - the Welsh, Irish and Scots". He taught himself the bagpipes, proclaimed himself King of Scotland and was rumoured to keep severed heads in his freezer and throw political victims to the crocodiles. But when he announced that he was expelling all Asians, giving them just 90 days to leave the country, he caused an international outcry. Isolated abroad and with mounting opposition at home, an increasingly paranoid Amin began to place uneducated tribesmen and soldiers in positions of power. They were able to kill with impunity. "It's impossible to overstate just how frightening and terrifying this place was. Everybody was watching everybody else", states journalist, Jon Snow. "The soldiers used to say it was more expensive to kill a chicken than a human being because you had to pay for the chicken", recalls Ugandan Joshua Mabonga-Mwisaka. Many of the actors starring in 'The Last King of Scotland' grew up under Amin. "I know Idi was monstrous because I lived through that time", states actor Michael Wowayo. His father was mutilated and is buried in one of Amin's mass graves. During these dangerous times, Michael's generation grew up hearing strange and dark myths about their leader. It was rumoured he ate the flesh of his victims and murdered his own son. "We feared him so much that you felt everything negative about him had to be true", recalls Stephan Rwangyezi. But to many Ugandans, Amin has become an icon. "I look at him as a hero who tried to bring out Uganda's nationality", states youth Co-ordinator, Chris Rugana. "People are rapidly forgetting what happened", fears Michael Wowaya. "Hopefully films like this will help people remember". (TwoStep Films)
FULL SYNOPSIS
TRANSCRIPT