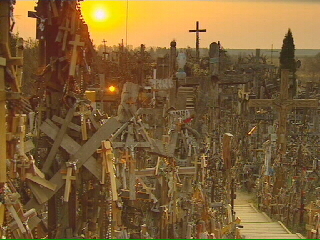 Lithuania's national treasure, the Hill of Crosses, has a troubled and mysterious history. The Soviets repeatedly tried to destroy it. Now, it's become a symbol of the nation's struggle and spirituality.

The Hill of Crosses - a small mountain of approximately 100,000 crosses - is a curious phenomenon. No one manages or organises it - it just is. The Soviets razed it again and again, only to have the crosses reappear. As Prof Viatanis Rimkis explains: "During the struggle for our freedom, the crosses became a weapon that was invincible."
FULL SYNOPSIS
TRANSCRIPT