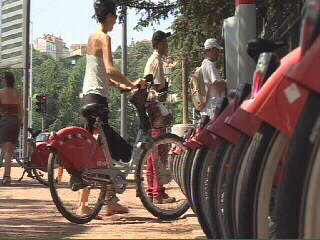 In Lyon, an intriguing collaboration between private enterprise and the city council has slashed car usage and improved residents' health. Now, there are plans to introduce the scheme in other cities.

Using a prepaid card, residents can rent city bikes for free for the first half hour. The scheme is funded by advertising company, JC Decaux, in exchange for exclusive access to the city's public billboards. "We had to offer 2,000 bicycles, 200 bike stations, a server and all the maintenance", explains a JC Decaux spokesman. "But if our calculations are correct, advertising revenues will be about the same as expenses for the bike scheme." As scheme designer, Jacques Le Gars, predicts: "In five years time, it'll be common to see this kind of program in most major cities throughout the world."
FULL SYNOPSIS
TRANSCRIPT