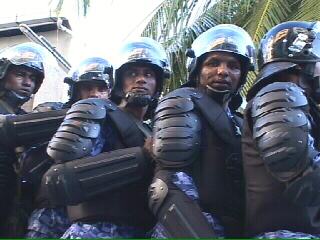 Hopes of greater democracy in the Maldives were crushed last week when the government sent in the riot squad. These exclusive pictures show the tactics used.

A man screams as his wife and children are dragged away to detention. Riot police cut off the main roads to the protest and arrest those who've turned up. The opposition had planned a week of rallies to challenge President Gayoom's 28 year rule. "We want freedom", explains one protestor. But following these heavy handed tactics, all future protests have been called off.
FULL SYNOPSIS
TRANSCRIPT