Karzan Sherabayani is going home to Kirkuk. He was arrested and tortured as a young boy under Saddam. Now he has gone back to confront his own demons, as well as those of his country. 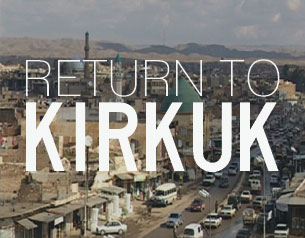 For the first time in 25 years, Karzan Sherabayani is going home. As a 14 year old, he was arrested and tortured by Saddam Hussein's secret police; targeted because he was a Kurd. He has spent the last decades in exile, struggling with his own demons. Now Karzan returns to confront his country's violent past and come to terms with its uncertain future. How do other Kurds feel about the West's policies in their country? Will Kurdistan be dragged into Iraq's bloody civil war or should it become an independent nation?

Karzan's hometown of Kirkuk should be one of the richest cities in the world. It lies on $70 billion of oil reserves. But "the only thing oil has bought us is disaster." Karzan's village; "lay on top of Kirkuk's main oilfield. It was the first Kurdish village to be destroyed by the Iraqi army." His brother, Abo, recalls what happened. "The army gave us 24 hours to get out. To save ourselves, we abandoned our belongings. We lost everything." "My name is Karzan Sherabayani. After many years living in Britain, I am going back to Kirkuk to vote in the first ever democratic elections." But after so many years away, it's a bittersweet homecoming. "So many people killed or disappeared; I can hardly recognise any faces in my neighbourhood." The cinema, so strongly associated with his youth, is now a car park. "It really breaks my heart." Pale and distraught, Karzan Sherabayani wanders around his old prison cell. "I cannot believe that I am here, back in this spot, 30 years later." The ground is littered with rubble; only the raw graffiti on the walls reveals the room's bleak history. One line reads; "I have entered this cell with my family and am only 13 years old", Another; "God, I have only you. Please God". Despite being badly tortured, Karzan was one of the lucky ones. "My brother bought my freedom and saved me from Saddam's monsters." With the elections overshadowing his visit, Karzan remains wary of the West's plans for his country. "In 1921, Britain created the state of Iraq, divided Kurdistan and crushed the Kurdish resistance", he explains. "My country was wiped off the map. I grew up with the knowledge that Britain was the cause of my people's pain and suffering." Today, the city is remains trapped in limbo. "Kirkuk was like this under Saddam and nothing has changed," complains one man. "We live in the land of gas and oil and don't have enough to keep us warm." Many Kurds believe their city has received no investment because; "Baghdad wants to hold back Kurdish political ambitions by strangling Kirkuk." This lack of infrastructure is increasing the tensions between the city's different ethnic groups. In an attempt to ethnically cleanse the city, Saddam deported 200,000 Kurds and replaced them with Arabs. "The Arabs are terrified that Kirkuk will become the future capital of an autonomous Kurdistan", states Karzan. But with no sign of the Kurds' position improving, calls for independence are growing louder. As one man states: "there is only one solution: Separation and independence."
FULL SYNOPSIS
TRANSCRIPT