Who watches Jihadi videos? Why? What effect do they have? We answer your questions. 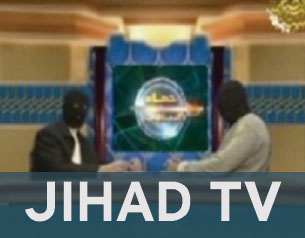 PREVIOUS BROADCASTS INCLUDE - NRK, ORF, SBS, SRC, YLE, PHOENIX, MORE 4 Videos of smiling suicide bombers and insurgent attacks have become as important a weapon as explosives in Al Qaeda's global jihad against the West. The jihadis have seized on the power of the internet and their message cannot be silenced. But who actually watches these videos and what effect are they having on young people in the Muslim world? And - for that matter - on their enemies in West?

Abu Muawiya smiles and blows a kiss to the camera. He's about to ram his car, packed with explosives, into an Iraqi checkpoint. Hours later, a slick and sophisticated video of his death is available to download. This is the jihadi propaganda machine, designed to inspire its supporters and terrify its enemies. The video is emotional, powerful and - thanks to the internet - you can get it anywhere in the world. "We use the programme 'Windows Movie Maker' to make the films", explains one jihadi producer. The whole process is taken very seriously. Only when the video has been checked and approved by the group's chain of command will it be taken to an innocuous internet cafe to be uploaded. "The CIA can search for ages. Even if they find the cafe where it was uploaded, they can never find the person", explains journalist Faris bin Hizam. Al Qaeda have always recognised the importance of propaganda. When planning September 11th, they filmed the wills of the hijackers against an easily replaceable background. This enabled them to edit in shots of the World Trade Centre in flames later. For them, 9/11 was as much about creating iconic images as killing their enemies. But it was the war in Iraq and spread of broadband internet that turned the trickle of propaganda into a torrent. On the streets of London, thousands of miles away from any frontline, angry young Muslims lap up these videos. "The way we see it, the videos remove a misconception", explains Abdullah. "America wants to show itself as a superpower which cannot be defeated but the videos show the power of Allah." Radical Islamist ideology has become a badge of identity for Muslims who feel demonised by the country they grew up in. The videos are also a big hit in the markets of Baghdad. "If all I could do was watch these videos, my life would be worthwhile", states one teenager. Nadim Abdel-Razak left his village in Lebanon to join the jihad in Iraq after seeing pictures on TV. "We saw an Islamic country being attacked, houses destroyed and innocent people killed", he states. But surprisingly, it was the pictures broadcast on the nightly news, rather than jihadi videos, which galvanised him. Amazingly, when the producers show him a video of a hostage beheading, he breaks down and cries. The evidence is that relatively few people, even in an Arab world seething with anti-Western hostility, actively search out jihadi videos. "The number is small in general because these websites are password protected", explains Faris Bin Hizam. But people do avidly watch Arabic satellite channels, like Al Jazeera or Hezbollah's Al Manar. And every day, the top stories in the news are about the suffering of Muslims. "I watched Al Jazeera, Al Arabiya, Al Manar and Syrian TV", states director, Paul Eedle. "I saw children buried under destroyed houses, people cut into pieces." The sad fact is that a whole generation of young Muslims is growing up with their view of the world shaped by images of war in the Islamic world. They don't need to watch jihadi videos to be radicalised. They just have to watch the news.
FULL SYNOPSIS
TRANSCRIPT