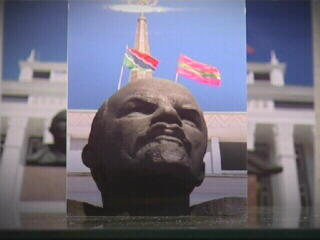 It's a criminal breakaway republic, recognised by no other nation and isolated from the rest of the world. Now dissident voices from Transnistria are speaking out against the nationalist regime.

"They are criminals who do not care about human life", states Maxim Belinski from the Helsinki Committee. When he tried to supervise a trial in Transnistria, three men kidnapped him at gunpoint. He was badly beaten and narrowly escaped being killed. "If they would do things like that to a member of the Helsinki Committee, what would they do to an ordinary citizen?" Dissidents describe how they were forced into exile. "It was said quite clearly; 'if you stay here, you will properly be dead by tomorrow'", recalls Sergei Ostaf. The police are believed to be involved in trafficking and Transnistira gives sanctuary to known criminals.
FULL SYNOPSIS
TRANSCRIPT