What's it like growing up in a war zone? Dodging bullets, hiding from Israeli soldiers and losing their land to settlers is part of every day life for these children. A fresh perspective on everyday life for Palestinians. 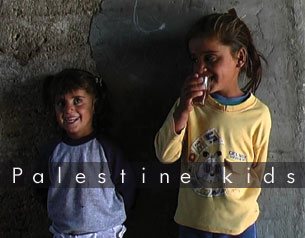 What's it like growing up in a war zone? Five year old Diana lives in a cave in the West Bank. Mufida, 16, is struggling to complete her education with Israeli soldiers living on her roof. And Yassin, 7, just wants to move to Brazil. Dodging bullets, hiding from Israeli soldiers and losing their land to settlers is part of every day life for these children. Through their eyes, we gain a fresh perspective on everyday life for Palestinians.

Mohammad, 10, and his younger brother, Yassin, are arguing about what to be when they grow up. "I'm going to be a pilot", declares Yassin. But when he hears that his big brother wants to be a fighter and "invent armaments", he changes his mind. "I'm going to bomb the Jews and be a fighter too". Every Friday, the boys attend a demonstration against Israel's security fence. "It's very dangerous for the children but they want to go", reasons Mohammed's father. Already, the boys are obsessed with; "defending the Palestinian people". Five year old Bessel loves "playing lego on my mother's bed". He lives in a comfortable suburb in Jerusalem and wants to be a doctor. By Palestinian standards, Bessel's family are extremely well off. But he's already showing signs of psychological trauma. "The situation for our children is very difficult due to the checkpoints", explains a child psychologist. Bessel dreams of; "somersaulting over the wall and jumping away from the enemy". For the past seven years, Israeli soldiers have been living on Mufida's roof. "They chose our house because it's a high building so they can see all of Hebron from it", she explains. "The soldiers have turned our farm into a rubbish dump." Her family have given up buying new glass for their windows. Every time they replace their windows, settlers immediately smash them. To get to school, Mufida has to walk past settlers' homes every day. "They throw stones and eggs at us", she complains. "I'm afraid of them". Her friend broke her leg trying to dodge a hail of stones so now they have to be accompanied to school by Christian Peace-keepers. "I want to live in peace but then I see what they do and I hate the Israelis". Settler violence has also forced five year old Diana's family from their home. "They told me they would kill me", states Diana's father. Their village of Qawawis is surrounded on all sides by Israeli villages. Palestinian families are forbidden from building new houses or drinking water from their own well. "I love Qawawis and still want to play here", states Diana. But later, she admits she's terrified of Israeli soldiers. "The army comes and scares us". Despite coming from different backgrounds and living in different villages, one thing unites these children: a sense of persecution.
FULL SYNOPSIS
TRANSCRIPT

Corrie Birch was born in Australia: spent some formative years in London, has travelled to around twenty countries, has hitchhiked across Australia a few times and has spent the last three years in China. He has studied film and television at college and university and worked for various production companies. His first full length documentary 'Palestine Kids', was self funded by teaching kindergarten children in China (now that's dedication). He is currently in post production on his next project 'White Dragon Mountain', about skiing and snowboarding in the Middle Kingdom. He plans to win an Oscar one day.

Travelling to the West Bank was an eye opening experience. No matter how much research you do, the experience of actually being there takes some acclimatisation. It's difficult to really know the physical and emotional terrain without being there and feeling it. Especially in a region of such ingrained tension and politically twisted geography. I was working solo, with no budget and often found myself alone in strange places. Places where outsiders are viewed with suspicion or fear, such as the old city of Hebron, where the fragile peace balances on a knife edge. It was sometimes hard to put myself in these harsh situations and to return again to get more shots or conduct more interviews. Face to face with the darker side of human nature, the machinations of power and the results of hatred. It was necessary to make connections and build up trust with people, to get inside the communities and let them know my perspective. This took time and repeated visits, building rapport with the families and giving me the chance to film inside daily life. I didn't want black and white, I wanted human nature; with it's ambiguities, frailties strength and beauty. I don't believe documentaries can be unbiased, but I do believe they can be true to the emotion of the experience. I believe one has to remain human, an individual and relate naturally to the people and situation to get inside the story, but not get so caught up that you lack perspective.