In Search of Happiness

Decades before the founding of Israel, Stalin created the first Jewish homeland. Birobidzhan was, admittedly, in a remote corner of Siberia, thousands of miles from civilisation. But countless volunteers flocked there to build their own community. 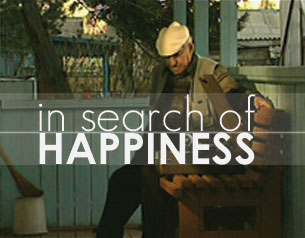 Decades before the founding of Israel, Stalin created the first Jewish homeland. Birobidzhan was, admittedly, in a remote corner of Siberia, thousands of miles from civilisation. But countless volunteers flocked there to build their own community. Eighty years later, the last surviving residents are still struggling on. One of the few remaining villagers is Boris Rak. He wanders around his dilapidated farm, staring wistfully at photos of relatives who have long emigrated to Israel. Mixing fascinating archive with images of life in Birobidzhan today, this is a poignant look at Stalin's forgotten Zion.

The collective farm in Birobidzhan, once the community's pride and joy, is little more than a crumbling wreck. Bricks lie scattered on the floor; the windows have long vanished. But to Boris Rak, chairman of the last Jewish collective farm, it's a memorial to his life's work. "Back then, things were easier. The times were different", he recalls. Rak's parents were amongst the first settlers at Birobidzhan. "When the first two tractors arrived, nobody knew anything about machinery", explains Rak's wife, Masha. "Somebody needed to become the tractor driver and it was decided to offer that job to the former stable boy, Yekhil Rak." Photos of Rak's father, proudly astride his tractor, beam down from walls of the village museum. Every spring, Boris and Masha make their way past dilapidated buildings and abandoned synagogues to visit their parents' graves. "You take the small brush and I'll take the big one", states Masha as they carefully repaint the Red Soviet Stars on each tombstone. Their own children; "were among the first to leave" Birobidzhan for Israel. "Things are hard for them at the moment but they don't intend to come back", laments Masha. When Boris and Masha die, there will be no-one left to paint red stars on their graves. Despite their advanced age, the remaining citizens of Birobidzhan, preserve the well established rhythm of life. Boris still tends his small plot of land, naming his animals after Russian political leaders. "We felt a bit sorry when we sent Yeltsin for meat", he writes to his son. "Your mum and I miss him". Masha runs the small village museum. But her memories are fading and she stumbles over details. All their achievements now seem bittersweet. Boris was recently awarded the title of 'Honorary Citizen of the Jewish Autonomous Region'. He received a telegraph of congratulations from the government. But at the same time, the collective farm was declared bankrupt and its assets were sold off. Then, he was invited to a celebration of the 75th anniversary of his school. When he arrived; "There was no one else there from my class. Many of them are dead". Ironically, many residents of this first Jewish homeland have forgotten the dates of Jewish holidays and no longer maintain religious traditions. But their strong sense of cultural heritage remains. Every so often, Boris will retrieve an old gramophone from the cupboard, put on a dusty Jewish record and sing quietly along in Yiddish.
FULL SYNOPSIS
TRANSCRIPT

I have been working at the documentary cinematograph since long. During this time I did films about many different people. But in reality, the ideas for my films were coming from Soviet leaders. I never had to make a choice. They used to order me and I used to execute. But somewhere deep in my mind I had an idea, a dream. I was badly willing to make a film about Jews in Russia. (It is clear enough why  Im a Jew myself). But it was impossible in the Soviet times, when the anti-Semitism was almost a State policy. The proposal to make a Jewish Autonomous Region deep in taiga (there were only Stalins concentration camps there) was in absolute accordance with this policy.
Later, during Perestroika, some very interesting documents on Birobidgan have fallen into my hands and my interest in this question has grown.
The hero of my future film Boris Rak is almost of the same age as Jewish Autonomous Region. His life story is the story of Birobidgan. I would really like to share this story, showing the facts, a big archive and emotions.
The world of the future film will represent a flow of accidental, at first regard, events. By help of this film the spectator will have an opportunity to understand and to feel the untamed essence of life. The aim of the documentary film is to get the best possible likeness of real life. It is this likeness that gives an opportunity to create an emotional work of cinematographic art in the documentary cinematograph, which should influence audience much stronger than just a simple transmission of facts.
If the realization of the film is postponed, than maybe some parts of this tragic story will be lost and its heroes will possibly just pass away, so that the carrying out of this project will become practically impossible

Alexander Gutman graduated frm the All-Russia State Institute of Cinematography and has become a mature master with his own manner and extraordinary view. Documentary films, shot by A.Gutman, can be always distinguished by extraordinary, non-standard creative view. He is interested not only in facts and realities of nowadays. He focuses his opinion on the inner world of the character. A. Gutman always creates a bright image of our contemporary, and expressive visual images favorably distinguish his works from many other films. Extraordinary directors solutions and non-standard approach to development of films devoted to different topics were marked by humanism, humanity and patriotism. First directors work of A.Gutman  film Circle, shot in 1989 was noticed by auditory and critics. The next film  The Russian have gone, shot in 1991, was awarded several prizes at International festivals in Finland, Belgium and Egypt. The following films by director-cameraman A.Gutman were focused on the inner world of characters, atmosphere of life of perestroika epoch. In 1993 A.Gutmans film 1244, 1245, 1246 was awarded the Main prize at film festival Photogramma de Oro in Italy and a Silver prize at the Open Russian Festival of Non-Fiction Films in Ekaterinburg. After his film Body Without A Head or Bodybuilding A.Gutman has become widely known. This film is about a man who was a model for a huge number of monuments during Soviet Times, including the famous monument by Vera Muhina A Worker and A Kolhoznitsa (a collective farm woman-worker). In 1996 the film was awarded the Main prizes at film festivals in Spain, Portugal and Jury prize at festival in Canada. The next film of A.Gutman Three Days and Never More, shot in 1998 attracted great interest of the whole country. With the help of artistic means of documentary cinematography it raised the theme of capital punishment in Russia. A.I. Pristavkin, the chairman of Pardon Committee under Supervision of the President of Russia, in one of his interviews said that film of A.Gutman Three Days and Never More  was his brightest impression for the past years. Journey back to Youth (2002)  is a film about the last months of the Great Patriotic War. In 2001 it was awarded Platinum Prize at International film festival in Huston (USA) and prize Golden Camera at US International Film and Video Festival. During his work in cinematography director-cameraman A.Gutman has shot as a cameraman  more than 100 films and news-reels, and as a director  about 35 short and full-length films.