Journey of No Return

A sensitive look at the terrifying world of senile dementia. 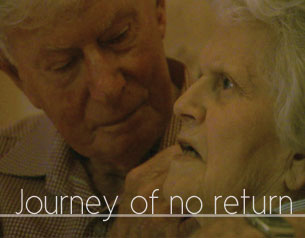 Every week, thousands of patients are diagnosed with dementia. Sufferers are left confused and helpless as the disease gnaws away at brain functions; robbing them of personality, memory and living skills. One of its most upsetting repercussions is on family relationships. This moving documentary looks at the impact of dementia on sufferers and their families. It follows three people with dementia over a period of 12 months.

"They knocked me right over", sobs Daphne distraught. "I haven't got anybody". A routine trip to the bathroom has gone awry and nothing will console her. But her husband, Jack, has vowed to look after her "to the end". He brings her fresh muffins, wipes away her tears and hugs her tenderly. "You're my lady and always have been", he whispers. Daphne's tears are another sign of her advanced dementia. "You wonder just how much is really going on in her brain", confides Jack. She requires 24 hour care and lives in a nursing home. Jack visits faithfully three times a week but his wife is not always aware of his presence. "Jack didn't come today, did he", she mumbles. "I'm Jack", he replies patiently. "Your Jack". Unlike Daphne, Joan is being cared for at home by her husband, Ken. "As long as I can care for Joan, I will", he promises. But as Joan deteriorates, it will become less practical for her to remain at home. "I've got to the stage where I have to turn off the water when I go out so that she doesn't flood the house", he says. Like many carers, Ken feels isolated from the rest of society. "People just don't know how to cope with it so all the invitations have gone", states Ken. "It's a lonely life as the disease progresses". Morry Klajman, in the early stages of dementia himself, agrees. "There's a stigma to it ... people sort of shy away". With their lives completely dominated by their role as carer, it can often be difficult for people like Ken to adjust when they are no longer needed. Daphne and Jack's children worry what will happen to Jack when their mother dies. "His life is focused around her", states son, Greg. "We wonder how he's going to cope". As the disease progresses, it becomes impossible for sufferers to have a meaningful relationship with their family. "She's just a different person now", states Joan's daughter, Lyn. "Her personality's totally gone and I don't feel the connection there used to be". Son, Mark, worries about the impact looking after Joan is having on Ken. "I think it's starting to become quite draining to him". A few months later, even Ken is starting to recognise that Joan needs professional care. He's worried because he's frequently losing his patience. "I get so frustrated when I feed her because she doesn't want to eat", he confides. "It's terribly disconcerting for me". He decides to put Joan in a hostel for a trial period of a week and tells her she's going on holiday. "The house seems terribly big and terribly empty", he confides. "I can't get over it". As Joan and Daphne's stories demonstrate, the slow descent into dementia is heartbreaking for those left behind. But their stories are also a testament to the power of enduring, unconditional love.
FULL SYNOPSIS
TRANSCRIPT