Budiman Sudjatmiko and his fight for democracy in Indonesia 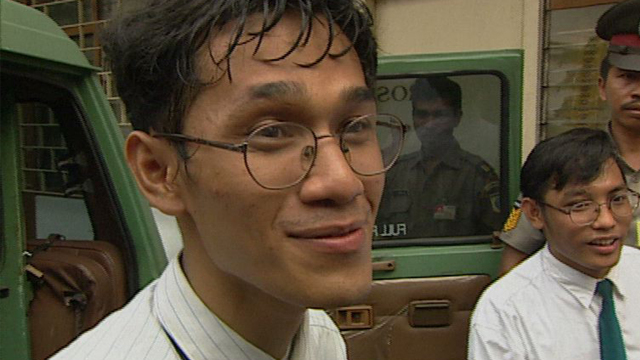 Increasing numbers of Indonesians are daring to oppose the government despite the harsh penalties.

Democracy in 90's Indonesia is flawed to say the least. Despite holding elections, alleged corruption, as well as control over the media and judicial system, undermine the country's claims to a free society. An interview conducted by an ABC journalist, asking Siti Hardiyanti Rukmana, daughter of President Surhato and ruling Golkar Party's star campaigner, makes front pages the next day - evidence of a country whose journalists do not ask politicians tough questions. Yet despite widespread government control, dissent is brewing. 27 year old Budiman Sudjatmlko's story epitomises the growing opposition to Surharto's rule as well as the fate which awaits those who speak out. In his final courtroom appearance Budiman gives a dramatic and colourful performance to a packed gallery of family and supporters. Handing out flowers to the judges of his case, he announces his lack of faith in the Indonesian justice system. Budiman's parents watch from the public gallery as, instead of making a plea, Budiman reads a four hour critique of the government. Only the judges, in danger of falling asleep, and the prosecution remain unmoved. Back in court to hear his sentence he refuses to stay to hear the verdict, but a verdict is given nonetheless - 13 years imprisonment. Before being escorted away in a police vehicle, he climbs on top of it in a defiant show of bravado. Yet it is not only radicals like Budiman who oppose the government. The Muslim based PPP, the de-facto opposition in the country, believe they have been marginalised by the Surhato regime. ABC Australia reports from Jakarta, conducting interviews with Rukmana and Budiman. Produced by ABC Australia
FULL SYNOPSIS
TRANSCRIPT