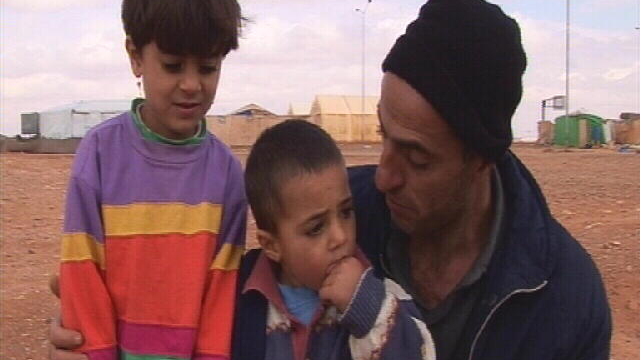 The flood of Iraqis to neighbouring countries has provoked the greatest Middle Eastern refugee crisis in 60 years. They live in cramped squalid conditions, in constant fear of being deported.

Abu Maher still struggles to talk about the day he was kidnapped by insurgents. His back is a patchwork of scars and burns. Although now safe in Jordan, Abu Maher's suffering continues. "I am living in sadness and misery". When his children go outside, other children throw stones at them. "They tell us 'Get out of here you Iraqis!'" confides his young son. Many Jordanians blame Iraqi refugees for driving up living costs. "We're the country who hosts the most refugees per capita in the world", explains government spokesman, Nasser Judeh. Hundreds of thousands of Iraqis are struggling to survive in Amman. But, no country will offer asylum to Palestinian refugees, also fleeing Iraq. These refugees are now stranded and stateless in border camps like Rweished. "Our only fault is that we're Palestinian", despairs Khaled. During summer, temperatures here reach 50ºc. In winter, they fall below freezing. Their tents are regularly ripped to shreds by sandstorms and people have reached breaking point. "Most of us here is sick. Everyone is suffering."
FULL SYNOPSIS
TRANSCRIPT