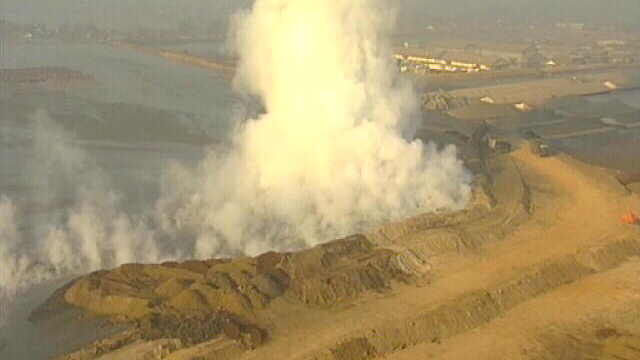 For over a year, thousands of meters of boiling mud has spewed from a hole in the ground in Java, submerging entire villages. What caused it and who is responsible is the subject of a protracted battle.

Somewhere, beneath the sea of boiling mud, is Juwarno's house and land. He's one of 9,000 people who lost their home after the mud submerged his village. "I need compensation", he despairs. "I don't want to be relocated". The mud started pouring from a site close to where an exploratory company was digging for gas and two days after an earthquake. Most blame the gas company, claiming the mud lake was caused by "gross negligence" and pointing to a string of errors. But the mining company claims the mud is a "natural disaster" triggered by the earthquake and refuses to accept any responsibility.
FULL SYNOPSIS
TRANSCRIPT