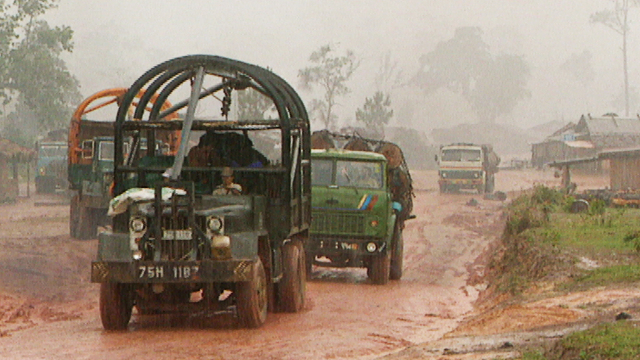 ABC Australia profiles Laos's General Cheng, leader of the military, director of one of the country's biggest logging company BPKP, and one of Laos's most powerful figures.

General Cheng remains one of Laos's most powerful figures for a multitude of reasons. He runs the Mountainous Area Development Company (BPKP), one of the biggest logging companies in Laos. While they face accusations of destroying the forest, the company itself claims it is the forest's guardian: "It's not so high, 600,000 cubic metres - it's not too much. There's only one factory in Malaysia, only one factory," says one director on the company's production. Cheng also conveniently runs the Human Resettlement Programme, set up to relocate local people from the forest where his company logs. The programme exists to protect the forest, as the traditional "slash and burn" method used by locals is destroying the forest. Many locals have been moved to villages created by BPKP, but with no land, no job prospects, and no chance of selling the house given to them by BPKP, the future looks bleak. Cheng not only wields influence over business; he owns his own private zoo, which he claims protects vulnerable species affected by logging, and a school populated by village children taken from their families by the BPKP. ABC Australia interviews Cheng himself, and well as individuals involved in his various ventures, in a profile of man with ever expanding influence. Produced by ABC Australia
FULL SYNOPSIS
TRANSCRIPT