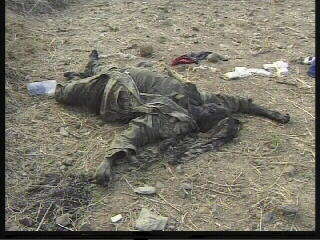 For months whilst the world focussed its attention on the conflict in Kosovo, Ethiopia and Eritrea fought a bloody war over a few thousand kilometres of scrubland. This wasn't a conflict of precision bombing and 'zero deaths', but of a trench warfare and human waves mown down by gunfire. tens of thousands have died. But these two countries share many ties of friendship ad heritage. This film shows how these ties have only increased hatred. Former comrades in arms now face each other across the front-line, and all feel betrayed. There have been mass deportations of eritreans from Ethiopia - we meet one man who has had to leave behind his Ethiopian wife and family to come back to a country he does not know. A Martin Adler report.