Belfast - No Peace on the Streets

The divide runs deep between Protestants and Catholics of Belfast 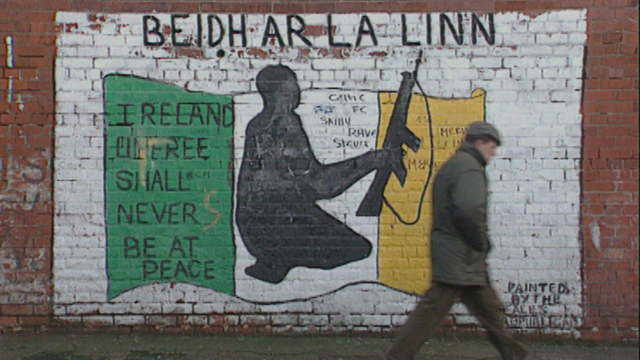 Division is rife in Belfast. Everybody is affected in some way or another by the troubles: either through murdered relatives, petrol bombed property, or direct involvement with the paramilitary. The Irish Republican Army and the Ulster Freedom Fighters both have strong presences in the city.

"These three properties were petrol bombed... just because I was a Catholic", says Belfast businessman Sam Cushnahan. Belfast is a deeply divided city, both figuratively and literally through the infamous 'Peace Lines', and violence lurks around every corner. Mary Nolan, however, believes it is justifiable. "As soon as those peace talks are accepted, they will have died for nothing", she claims, referring to the hundreds whose lives have been claimed in the struggles. The Republican IRA is seen as the main terrorist organisation in the area, originally created to force the British out of Ireland but now a force to be feared by all within the city. John McMichael, founder of the Loyalist Paramilitaries, was killed by the IRA, but his followers retain a distrust of politicians, British and Irish alike. Catholic Patricia O'Connor sees little hope for peace. "There's too much hatred on both sides. And too much money to be made." A film by Mark Stucke and Scott White Enterprises
FULL SYNOPSIS
TRANSCRIPT