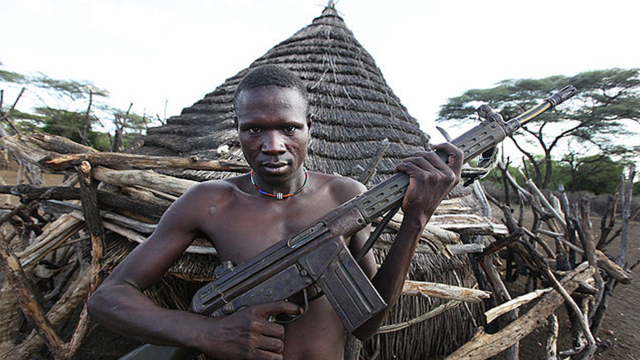 The Sudanese civil war between the Arab north and the African south threatens to spill over into neighbouring countries. This rare insight from the front-line includes exclusive footage of Muslim prisoners of war captures by the African rebel force, the SPLA.

We see that the conflict is spilling over to neighbouring Uganda. Here the fundamentalist Christian Lord's Resistance Army (LRA) wages its war against the Ugandan authorities. A cache of arms seized from the LRA show they are supported by Khartoum in an effort by Sudan to weaken Uganda, which in turn supports the SPLA. Includes moving testimonies of Ugandan Teenagers abducted by the LRA and forced to fight with them. They were fortunate enough to escape.
FULL SYNOPSIS
TRANSCRIPT
SHOTLIST