Voice of the River

The Lule River is Sweden's largest and most majestic river. Its upper valley was the home of the Sami, the reindeer drivers. Its powerful waters, frozen in winter, protected this community from the outside world. But things are changing now. 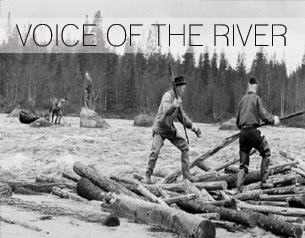 The Lule River is Sweden's largest and most majestic river. Its upper valley was the home of the Sami, the reindeer drivers. Its powerful waters, frozen in winter, protected this community from the outside world. But life has changed now. In the 1980s the river was dammed and mechanised deforestation began. In its own lyrical tones and using the photography of Stig T. Karlsson, the river charts its story. Harshly realistic, but incredibly poetic, this is a breath-taking film.

"In the springtime when the ice melted they filled me with timber. The logs danced about in my rapids", remembers the river, "those were the days when I was still free, when I still had all my powers". These were the days of the log drivers: their dark winters spent laboriously felling trees ready for the summer, when the world would come alight. "Yes, I was a lecherous logger," admits Uno. "We were a whole gang of boys who got into floating, no boat needed, we ran on the logs", taking them down river to the towns to be sold. As Eva-Stina explains, in those days; "the river was something special. As children we were always by it or on it somehow." Even now, she feels; "the river flows through me". For this older generation, deforestation and the damming of the river represents; "a colonial power that comes and gnaws away under your skin". But is everything lost? We let the river take up the tale once more. "Around me, in my tributaries, is still the song of freedom. I call them my children. They know about yearning and revolting. They rush towards a future that I believe will make many of us break our chains." Somehow this wisdom is reflected in the struggle of those who live by it to find a compromise between the old ways and the demands of modernity. Exuberant entrepreneur Mats Lund, his huge log-cutting machines at work day and night, looks to the future. He explains that he has been a logger since he was thirteen, just as his father was before him, and he loves it. Sometimes he goes out into the forest to visit "his lads" and "it's so much fun" he doesn't return for three days. But for Uno Wikland, the future holds little. Alongside other protesters, he fought the engineers who dammed the river - but they lost. "There was this engineer, he was young. He spat on my courtyard and said, 'But this can't be worth anything, can it?'" The dam flooded his house and his livelihood was unutterably altered. Even Mats from the logging company admits: "that things didn't go well. We make a living out of it, that's the main thing. And we support many other people." But the human story is not all bleak. Young Helena Omma has always been told, "how very beautiful it was before they built the dam". But although she never saw the river in its undammed state, she believes that: "it is still the most beautiful place in the world". Throughout this hauntingly beautiful documentary what strikes home is the fleeting nature of man's influence. As it has comforted the inhabitants of it's valleys, so it's lyrical voice comforts us; "Perhaps there are possibilities and futures no living creature has yet imagined."
FULL SYNOPSIS
TRANSCRIPT

Directors biographies: Johan Bergström born 1947 in the province of Värmland. Novelist and film-worker. Educated at Dartington College of Arts and London School of Film Technique. Lived for many years in England, worked with Group 64 Productions. Travelled extensively and lived longer peiods in Africa, working with refugees. Lived 1988  2002 in Berlin, Germany, working with the film co-operative MAGNETICA FILM, as script-writer, producer and director. Has published five novels and numerous plays for the stage, radio and television. Has also worked as a seaman, trawler-fisherman and scaffolding worker. Bo Harringer born 1947, has been working as a director, photographer and producer since 1980. He has taken part in a varaity of independent films, such as feature films, short films and documentaries. He also works as a producer at the University of Gothenburg, runs the production company FilmAteljén. Today he mainly produces documentaries, but also commissioned work.

When we looked at the last decade of documentary productions we were struck by how few of these films portrayed workers or conditions of manual work. A very obvious tendency had been towards extremely individualistic portraits and extreme and dramatic living situations. There was a void here  an avoidance in media - as regards the subject of work. This absence and the prints of Stig T. Karlsson, which portrays the log-drivers along the majestic Lule river in Lapland, was our point of departure, when we deceided to make `VOICE OF THE RIVER.´ But from the very start we knew we did not want to make just a beautiful, but nostalgic film about the log-driving that now no longer existed along the mighty and wild river, which has been tamed by the huge hydro-electric plants and where deforestation is an acute and growing problem, undermining the very chances for people to continue to live and work in this breath-takingly beautiful landscape. We deceided to make a film that was at the same time harshly realistic and very poetic, as beautiful as we could make it. That has been a chanllenge  dancing on the edge of a knife´s blade.