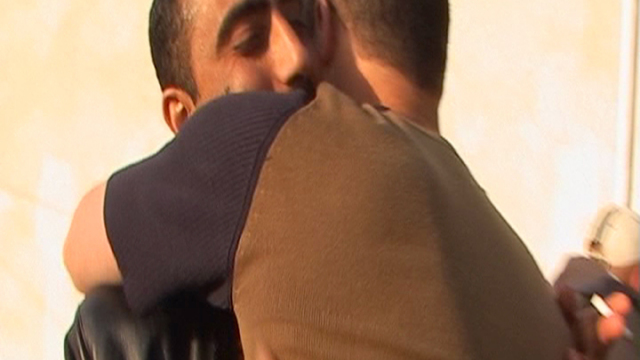 There's a real sense of optimism ahead of the Middle East peace talks. For the past two years, former Israeli soldiers and Palestinian fighters have been meeting together to call for peace.

Until recently, these men were trying to kill each other. "Our actions bordered on or crossed the lines of war crimes", states former Israeli soldier Zohar Shapira. But in 2005, he decided to break the mould and co-founded Combatants for Peace. "I understood I shouldn't be part of this stupid endless bleeding machine." The group now numbers more than 160 and members regularly travel around Israel and the West Bank, telling their story. One of the hardest tasks for Israelis is breaking down years of ingrained suspicion. "You see all Palestinians as enemies. You believe that all of them want to kill you". But now, Shapira has developed close friendships with Palestinian members. The group's commitment to peace was sorely tested when the 11 year old daughter of a Palestinian member was killed by Israeli soldiers. Shapira: "wanted to find the soldier, break his bones, destroy his checkpoint". But his friend rejected calls for his daughter's death to be avenged, reasoning: "More killings won't achieve anything".
FULL SYNOPSIS
TRANSCRIPT