An insider report on the boat trafficking of Africans to Yemen, the first stage of their immigration to the West. 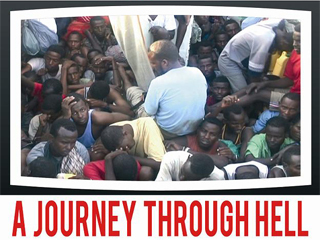 For the first time ever a journalist managed to get inside a boat trafficking African immigrants to Yemen, the first stage of their journey to the West.

Over 100 people were crammed in with him on the 30 foot boat. Denied food or water for the three day journey and without even room to move, they became ill and dehydrated. The traffickers kept them under control by regularly beatings and throw anyone overboard who complains. When they approach the shore, the refugees are forced to jump into the sea and swim to shore. Many can't swim or are so exhausted they drown. It's estimated that 40% of those who attempt the journey never make it. This is their story
FULL SYNOPSIS
TRANSCRIPT