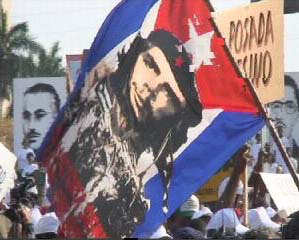 If his ill health permits, in less than two years' time Cuba's Fidel Castro will celebrate half a century of communism in his tiny Caribbean island nation of Cuba, but with the 80-year-old leader still looking pretty frail like Cuba's economy, many are asking whether his stubborn Marxist revolution will survive his inevitable passing.

"He created a totalitarian state that has absolutely nothing to do with Socialist ideals", claims dissident Oscar Chepe. "What we have is state capitalism run by a group that controls everything". Cubans are effectively forbidden from owning their own businesses and cannot access the internet or stay in the country's hotels. But not all Cubans are disaffected. Castro has enlisted 40,000 'trabajadores sociales' to ensure the future of the revolution. Today, they're replacing energy-inefficient fridges. "It's the new revolution - an energy revolution", explains one girl. JOIN THE DISCUSSION
FULL SYNOPSIS