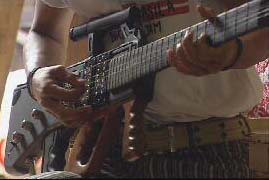 There's nothing punk musicians like more than provoking controversy. But for the Indonesian band, Punkasila, attacking their country's institutions and core values can be dangerous.

"If we play in front of the wrong audience, we could be killed", states band member Wimo. Little wonder they only play for safe and selected crowds. The group's first album poked fun at the Indonesian military and Special Forces. Since then, they've taken on Islamic conservatives and Indonesia's ideological principle of the nation. They see their music as; "a celebration of the new openness", rather than a rebellion.
FULL SYNOPSIS
TRANSCRIPT