Treasures of the Ashmolean 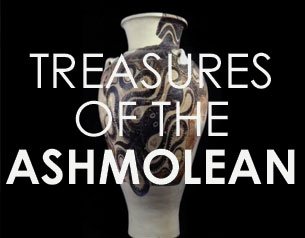 The Ashmolean Museum at Oxford University is believed to be the oldest museum in the world. Started by father and son gardeners in the 17th century it has grown over the last three hundred years to become an internationally important museum of art and antiquity.

The Ashmolean is not just one of the worlds oldest museums, it's also one of the greatest, with collections of art and archaeology from all of the worlds' major cultures. This includes footage of the largest Minoan Greek art collection outside Greece and the greatest pre-dynastic Egyptian collection outside of Cairo. Get drawn into the bustling 'Hunt in the Forest' by Paul Uccello, with its 'vividly-coloured figures/shouting, blowing horns'- one of the most magical pictures of the 15th century. Wonder at the shrine of Taharqa- a grand political statement, proclaiming to the world that he, Taharqa, had been chosen by the Gods to rule both Egypt and Nubia. Shrink with fear at the legend of the Minotaur and marvel at the Alfred Jewel- the last remaining artifact of the Anglo-Saxon King Alfred's glorious reign- heralding a new age of enlightenment and learning. A fascinatingly educative introduction into the glorious world of art history. Part of 'The Treasures of Britain' series. See here for the equally spellbinding 'Treasures of the Fitzwilliam' - www.journeyman.tv/59215/short-films/treasures-of-the-fitzwilliam.html.