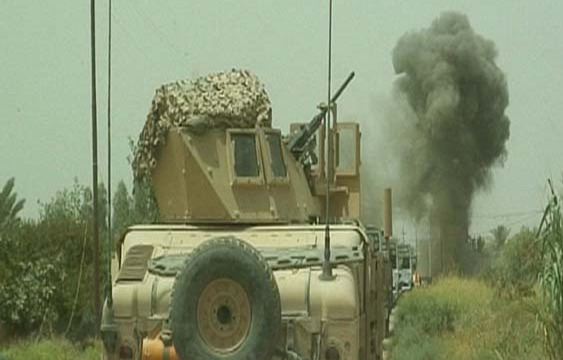 When the US surge began, most insurgents fled Baghdad for Diyala. Now, the Americans are taking the fight to Diyala. We join them as they begin a major security operation.

"We're gonna kill the people that need to be killed and be frickin' decent to the rest of them", states Sgt Maj Edgar. "There's no in between". The plan is simple. Airborne troops go in at midnight, followed by a heavily armed convoy. But the roads are littered with IEDs and progress is painfully slow. It takes 15 hours to travel 30 km. The soldiers arrive exhausted but there's no time for rest. "We know the insurgents are here". They search every house, checking residents against a blacklist of known insurgents. Then they mark villagers' hands with their house number. "They cannot wash it off and need to stay around their homes for the next 24 hours", states one soldier. "If they go to a different part of the neighbourhood, I'll arrest them". The 50°c heat is taking its toll on the soldiers. One starts throwing up from heat exhaustion and two others are given a drip of saline solution. "The heat's pretty crazy. Sometimes you just can't drink enough". All the men have had their tours of duty extended by at least three months. They're exhausted and being stretched to their limits.
FULL SYNOPSIS
TRANSCRIPT