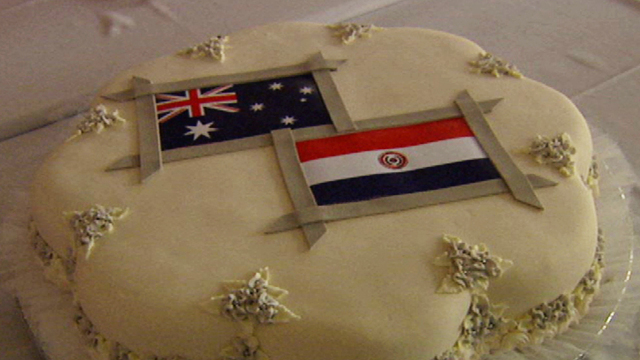 Paraguay, one of South America's poorest countries, is the surprising home to an Australian diaspora that began 113 years ago.


We meet descendants of what The Bulletin magazine of the time called "a harebrained scheme" to build a new Australia in the middle of the jungle, a society in which all Australians were supposed to be equal. About 2,000 Paraguayans can trace their ancestry to a group of 500 bushmen, shearers and unionists who left Australia in the 1890s, led by radical socialist William Lane, after a violent clash between Australia's colonial government, and striking shearers. Among those to undertake the journey was Mary Gilmore, who would later become one of Australia's best known poets. She eventually returned to Australia and excerpts from an interview she did in 1959 are included in the story. "It was purely communistic. I wouldn't say it was a success, but I certainly wouldn't say it was a failure." Dame Mary said. But the dream did fail. Within months the settlers had fallen out, with many refusing to obey Lane's rules of no alcohol, and no mixing with the locals. Many eventually returned to Australia, and those who stayed ended up abandoning communal living, and simply divided the land among themselves. We find that some of their descendants - with names like Wood, McLeod, Burke and Murray - are still on the same farms today. People like Basil Murray, the last living link with the original settlers, and possibly the last man in the world to speak with a 19th Century Australian accent. Basil Murray's grandfather, who died when Basil was 12, was one of the 12 unionists arrested over the shearer's strike. Basil Murray lives in a slab hut he built himself on the land settled by his grandfather, and is content with his lot. Other descendants, however, want to leave Paraguay and resettle in Australia. They tell Campbell that their grandparents fought with the Allies at Gallipoli, and they want to come home. Robin Wood, who spent fours years in Australia, says: "It's not an excessive price for all those young men who went to fight and to die ... a country has got a future, but should never forget that in the past they may have some debts."
FULL SYNOPSIS
TRANSCRIPT