The explosion at Chernobyl released a hundred times the radioactive fallout of a nuclear bomb. We profile the children who continue to be the worst affected by the disaster. 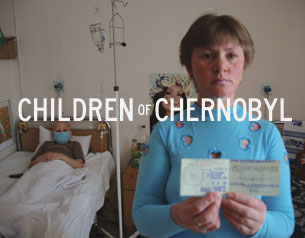 The explosion at Chernobyl released a hundred times the radioactive fallout of a nuclear bomb. Even today, no one knows how many people have been affected. One of the few things scientists agree is that children were and continue to be its primary victims. But while thousands of children have become ill, older residents are defiantly returning to their homes in the exclusion zone. They eat home grown vegetables planted in radioactive soil and wander around a ghost town that died twenty years ago.

The first thing that hits you about Pripyat, closest town to the Chernobyl nuclear plant, is the silence. The streets are abandoned. In the town's half-finished amusement park, a giant Ferris wheel slowly rots. Wandering around empty houses, you get a sense of the panic which must have driven evacuations. There was no time to pick up a dropped doll or close an open window. Most abandoned homes have been taken over by snow and vegetation. But of the 350,000 people displaced, 400 have returned - including Anastasiya Tchikalovets. "I can't think of any place better", she states. Having been forced to evacuate her home during World War II, she now refuses to leave. She grows her own food, ignoring the fact that the soil is radioactive, and raves about local produce. "The mushrooms are the best", she proclaims. "If they were radioactive, I would have long been dead". Understandably, there are no children in the towns nearest the reactor. The young are most susceptible to radiation. Nine year old Sima Ostapachuk lives hundreds of miles from the Chernobyl reactor. She suffers from lymphoma of the lung and the Ukrainian government has issued her with an ID card for victims of Chernobyl. But strangely science cannot link her illness to the nuclear accident. The main illnesses associated with the nuclear explosion are thyroid cancer and diseases caused by iodine deficiencies. "Other illnesses and types of cancer cannot be linked", states psychologist Alexis Ruis. Every year, hundreds of children are sent to Cuba for medical treatment. "The salt water is rich in iodine and they take it in naturally", explains Alexander Bozhko from the International Fund for Chernobyl. "It helps with their recovery". In the past 15 years, 18,000 children have travelled to Cuba for treatment. When he first arrived, Vladimir Zaslaski could not walk or even chew food. His mother used to carry him everywhere. "He was in such a state he could not sit up, lay down or eat on his own", recalls his mother. "It was hell". Russian doctors refused him treatment but in Cuba, Vladimir began walking again. He has also reduced his daily medication from 78 pills to six. Many children, like Anastasia, remain in Cuba for years undergoing medical treatment. She is now almost cured and looking forward to returning home next summer. For her father left in Ukraine, the years apart have been agony. "I don't just miss her. I can't imagine what she looks like anymore", he confides. "She left as a little girl and when she returns, will be a young woman". The irony is that while the region's children, born decades after the explosion, continue to be affected, there's talk of turning the exclusion zone into a nature reserve. The forests have grown back, wildlife has returned and rare species are plentiful. It's only the children who are missing.
FULL SYNOPSIS
TRANSCRIPT