Rain in a Dry Land

After more than a decade in an African refugee camp, two Somali Bantu families are relocated to urban America. But crash courses in English have ill prepared them for life in the USA and they struggle to adapt to America's material culture. 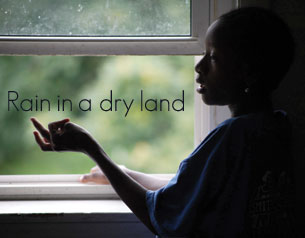 PREVIOUS BROADCASTS INCLUDE PBS
After more than a decade in an African refugee camp, two Somali Bantu families are relocated to urban America. We follow their first eighteen months, beginning with cultural orientation classes, where they are introduced to electricity and other novelties. But crash courses in English have ill prepared them for life in the USA and they struggle to adapt to America's material culture.

Two families are on their way to Atlanta. Aden toys playfully with the strange plastic meal he is presented with on the plane. His kids cram their noses against the window. "Are those rocks down there?", asks Aden's wife, Madina. "No, it is ice that falls from the sky." It is snowing in their new home, their breath makes it look like they are "smoking without a cigarette." Everything is very strange, but it is exciting. After years of eking out an existence in a refugee camp, being relocated to America is; "like a fantasy". During Somalia's civil war, the Bantu; "were treated like beasts of burden". Brutalised by warring Somali clans, they found safety across the border in Kenya. Now the "In Somalia we could not even open our eyes, in America we will concentrate on education", states Arden. The moment they touch down, Arden, Madina and their young children are cocooned in support. Their Bantu friends come to meet them, "We are all brothers. We should watch out for each other," and soon their friend Arbai will arrive with her seven children. Most importantly they are looked after by the Jewish Family Service. They will be funded for two years, the JFS will find the family housing, English lessons, schools and jobs. Everything seems simple. Yet it is not. There are constant problems. Madina goes on a search for food. They find a taco store and she asks for a chicken. She is not impressed with what she is presented with. "What they call chicken might as well be maize!" Then there are the overwhelming bills, they have not been accepted for housing support yet, and rent takes up all of their allowance. They have to do without heating. On top of this, social workers discover that "Madina is not really functioning." Her daughter Aday is working, "like a little Cinderella." Madina is suffering from her severely traumatized past. Back home she watched gunmen shoot her mother before they turned and gang raped her, "all night long my mind is wandering back to that time. It will haunt me to the death." The social workers obtain some medicine for Madina, but she can't open the security cap, "What is this thing that cannot be opened?" When Madina's friend Arbai arrives with her headstrong daughters, moral issues rear their head. Cultural assimilation lessons in the refugee camp had taught them that, "if you beat your child, they might be taken away from you." But what can Arbai do when her 13 year old daughter doesn't return home at night? "I said if she came home late again I would beat her. She said, 'You think you can beat me?' She said if I dared touch her she would call 911 on me." But then, with Arbai in desperation, and Madina contemplating stealing in order to feed her children, help arrives. Teachers at school discipline Sahara and she settles down. The Jewish Family Service arrange housing support for Aden and Madina and they can afford to live, and Madina begins to heal and becomes pregnant. She tells us "This is paradise, like rain in a dry land."
FULL SYNOPSIS
TRANSCRIPT