What will be the global fallout of the US subprime mortgage crisis? How can unscrupulous mortgage brokers in America send world stock markets into a spin? 'We examine how our interconnected finance systems left the world vulnerable to recession and worse. 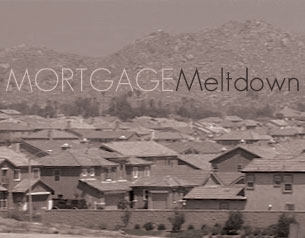 What will be the global fallout of the US subprime mortgage crisis? How can unscrupulous mortgage brokers in America send world stock markets into a spin? 'Mortgage Meltdown' examines how our interconnected finance systems left the world vulnerable to a global credit crunch. It traces the current crisis to the fallout from September 11, hearing from the families now facing destitution while the 'market corrects'. With banks now afraid to lend to each other, the subprime mortgage crisis threatens to push America, and possibly the rest of the world, into recession.

"This is Pete. He recently got a letter offering him a new credit card with a $3,000 limit and an interest rate of 18%. Which is odd, because Pete is a dog". Until very recently, the only thing people had to do to get a mortgage in America was - in the words of one estate agent - "breathe". Banks had money to burn following the Federal Reserve's decision to cut interest rates to 1% in the wake of 9/11. Chairman Alan Greenspan hoped pumping lots of money into the economy would stave off recession. But with all this cheap money to be had, American banks were desperate for customers. "It was really unbelievable who could borrow money". Everyone was encouraged to buy a house or refinance their loans. A new product entered the market - the subprime loan. It was given to people who wouldn't normally get credit so carried an extremely high interest rate. Brokers who sold them were unregulated and often unscrupulous. "The banks basically paid the mortgage brokers to defraud their customers", alleges Ed Kramer from Fair Houses Inc. Approx half the people steered into these expensive traps could have got cheaper deals. Subprime mortgages start of at a low rate to suck people in but automatically reset after two years, wrecking havoc on the people who took them out. People like Henry Mitchell. Henry worked 35 years, saving all his life to buy a house. He put his children through college and paid his parents' medical bill. Then he took out a subprime mortgage. Initially, Henry kept up the monthly payments, But when his mortgage reset, he couldn't afford the additional $1,000 charge per month. His house is now due to be repossessed. "I'm just praying for a miracle". All across America, the story is the same. In Cleveland, one in 20 homes is now in foreclosure. "The last time we saw a home price fall as big this is 1941 - the year the US entered World War II", states economist Prof Shiller. But tragic as these stories are, it's difficult to understand how a housing slump in America could affect people in Europe. The answer lies on Wall Street. It parcelled the subprime loans into mortgage backed securities and sold them to investors all around the world. "85% of capital flows from Europe, the Middle East and Asia into the US", explains financial expert Satyajit Das. "A good chunk of that has gone into subprime mortgages". As soon as people realised these debt backed collateral were essentially worthless, confidence in the market vaporised. "Hedge funds that had raised almost $1.7 bn are now worth almost nothing", claims Matthew Goldstein, editor of 'Businessweek'. As a result, there's been a global credit crunch, with banks too afraid to lend to each other. And it's likely to get much worse. "Eventually it will affect things like GDP growth, employment, investment and how people spend money", warns Das. In the next year, $900 bn dollars of subprime loans are going to reset at higher interest rates. Some economists, like Prof Nouriel Roubini, are now convinced that recession is inevitable. And, as he warns; "when the US sneezes, the rest of the world gets the cold".
FULL SYNOPSIS
TRANSCRIPT