Fujimori's greedy Peruvian officials and an amoral Canadian mining outfit decide to turn the town of Tambogrande into a gold mine. They had reckoned without this spirited community. A heartening story of strength and pride in the face of adversity. 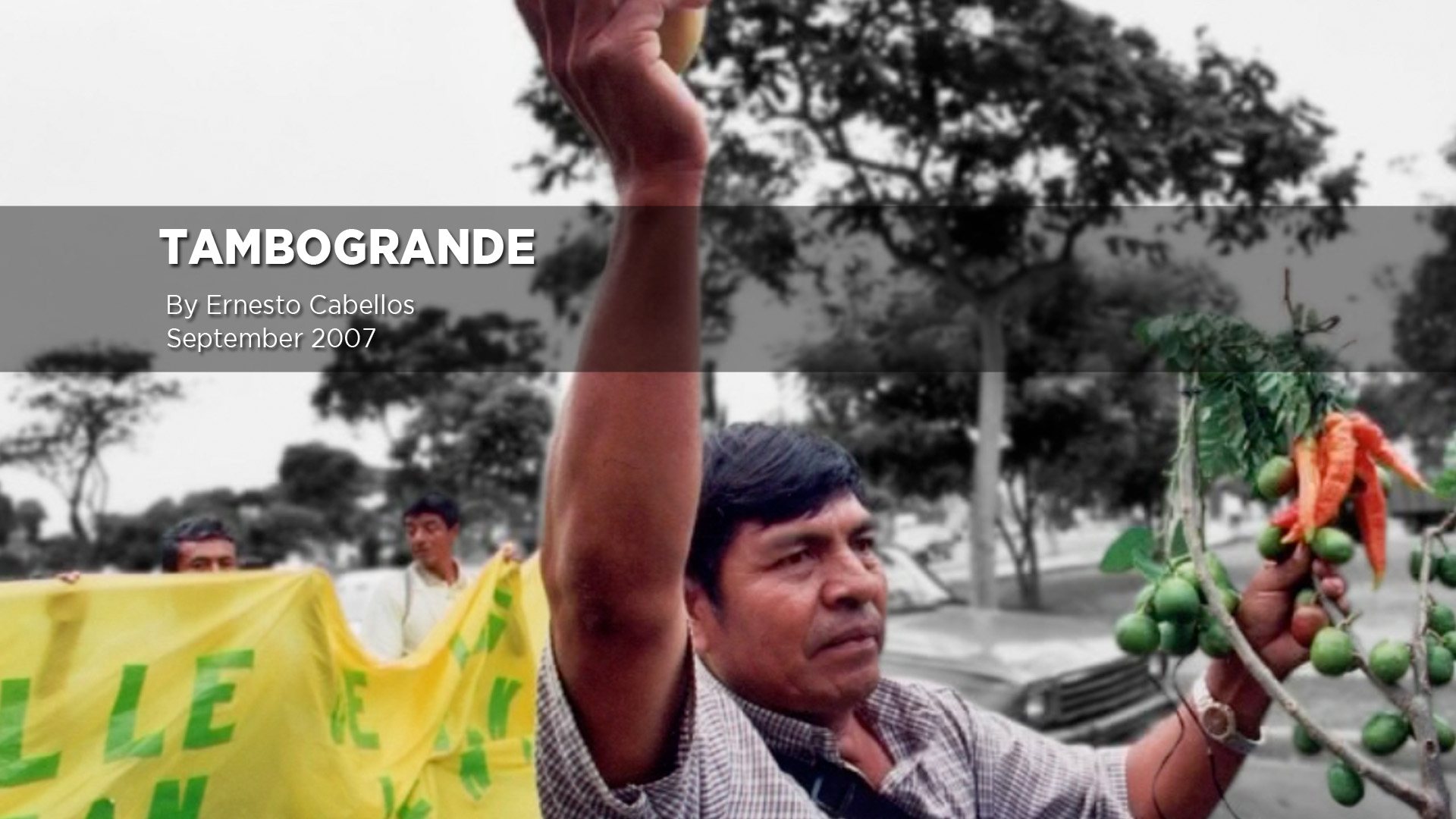 As the trial of Peru's ex-president, Alberto Fujimori, gets underway, the legacy of his administration is being reappraised. One of his most controversial actions was over-riding his own constitution and secretly granting mining concessions to a foreign multinational. The planned Tambogrande gold mine would have contaminated local soil and water supplies, forced half a town to be relocated and destroyed an entire community. But defying threats and violence, the villagers refused to move. This is the inspirational story of how they took on their own President and won.

"I love my plants as though they were my children", states Isabel proudly. "I'm not going to hand my land over to anyone". The inhabitants of the now luscious Tambogrande Valley worked for fifty years to transform barren desert land into a productive paradise. "Land like this is a treasure because it produces a lot. You can grow everything", boasts Don Berru. " But underneath the mango trees lies another kind of treasure. When deposits of gold were found, Canadian mining company, Manhattan Minerals, came to President Fujimori with an attractive proposition. In exchange for a 25% stake, his government ignored Peru's own constitution and granted Manhattan Minerals mining rights in Tambogrande. So it was that residents woke up one morning to find drilling machines outside their house. Manhattan Minerals wanted to relocate half the town. Residents were told; "If we don't hand over your property, the government will apply the law of servitude." Land would be seized and locals forcibly evicted. But unsurprisingly, people didn't want to move to the unproductive land they were offered. There was concern the mine would steal all available water supplies and pollute the soil. As Dr Robert explains; "Mining sites always have some degree of contamination." Fujimori and Manhattan Minerals had chosen the wrong community to pick on. Godofredo Garcia Baca led his community into battle with a simple war cry, "A united people will never be defeated!" When their glossy PR campaign didn't work, Manhattan Minerals launched a smear campaign against the protesting farmers. "They said we were violent people, terrorists and other things", describes Pancho. Despite the pressure, Tambogrande held firm. Then things reached a shocking climax. "We were enroute to our farm. A masked figure with a gun jumped out and fired. My father said, "They got me in the heart"', describes Ulises. Godofredo, leader of the anti-mining Defence Front had been assassinated. At this crucial moment, Pancho Ojeda, school director and farmer, took over leadership of the protest. Refusing to retaliate, he united the shocked farmers behind a non-violent ideology. "We've never carried a stick or a weapon to defend ourselves. Protests became cultural celebrations, with mangos and limes instead of sticks and stones." After years of campaigning, the government agreed to hold a referendum. 98.3% of the community rejected the mine, forcing the government to back down. Manhattan Minerals were forced to leave Peru in disgrace, facing financial ruin. Today, the struggle of the Tambogrande farmers is held up as an example of how: "the small can overcome the rich and powerful. Unity is strength."
FULL SYNOPSIS
TRANSCRIPT