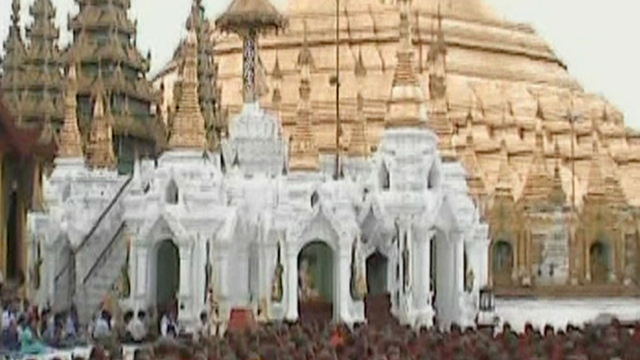 EXCLUSIVE: The first journalist's report from on the ground in Burma. Includes footage of the army firing on protesters. We hear from the protestors, willing to risk their lives to fight for democracy.

Oblivious to the danger, thousands of pro-democracy campaigners march through the streets. Suddenly, shots are fired. In the rush to escape, some protestors are trampled. "General Aung San did not create a military to kill the citizens", laments one man. Burma is one of the poorest nations in the world. While the Generals lavish millions on their families, 26% of the population survives on less than $1 a day. For many, the military's decision in August to double the price of oil and quadruple the price of gas, was the final straw. "Prices have gone up and it's hard to feed my family", laments one woman. The fuel increase was meant to pay for moving the capital from Rangoon to Naypidaw. But it forced the price of basic goods up. "Chicken has risen from $1 to $4.60", complains one woman. "It's horrible". It also led to some bus routes being cancelled, preventing employees from travelling to work. And, while prices keep increasing, salaries remain the same. People initially took to the streets, calling for fuel cuts. But when monks joined in, the demonstrations morphed into a wider protest.
FULL SYNOPSIS
TRANSCRIPT